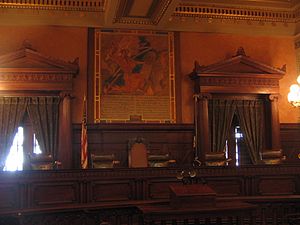 The original Pennsylvania constitutions, drafted by William Penn, established a Provincial Court under the control of his British governors. The General Assembly, however, espoused the principle of separation of powers and formally called for a third branch of government starting with the 1701 Judiciary Bill. In 1722, the appointed British governor needed the House to raise revenues. House leaders agreed to raise taxes in return for an independent Supreme Court. 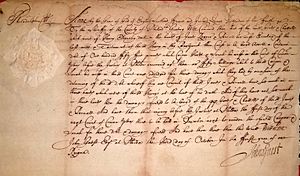 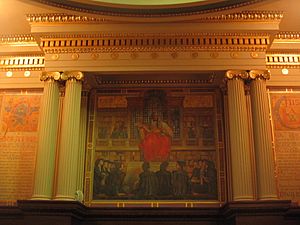 The court meets in three cities: Philadelphia, Pittsburgh, and Harrisburg.

The Pennsylvania Supreme Court consists of seven justices, each elected to ten year terms. Supreme Court judicial candidates may run on party tickets. The justice with the longest continuous service on the court automatically becomes Chief Justice. Justices must step down from the Supreme Court when they reach the age of 75, but they may continue to serve part-time as "senior justices" on panels of the Commonwealth's lower appellate courts until they reach 78, the age of mandatory retirement.

Prior to 2002, judicial candidates in Pennsylvania were prohibited from expressing their views on disputed legal or political issues. However, after a similar law in Minnesota was struck down as unconstitutional (Republican Party of Minnesota v. White), the Pennsylvania rules were amended, and judicial candidates may now express political viewpoints as long as they do not "commit or appear to commit the candidate with respect to cases, controversies or issues that are likely to come before the court." (PA Code of Judicial Conduct, Canon 7 (B)(1)(c))

After the ten-year term expires, a statewide yes or no vote for retention is conducted. If the judge is retained, he/she serves another ten-year term. If the judge is not retained, the governor, subject to the approval of the State Senate, appoints a temporary replacement until a special election can be held. As of 2005, only one judge has failed to win retention. Justice Russell M. Nigro received a majority of no votes in the election of 2005 and was replaced by Justice Cynthia Baldwin, who was appointed by Governor Rendell in 2005.

Only one Supreme Court Justice, Rolf Larsen, has been removed from office by impeachment. In 1994, the State House of Representatives handed down articles of impeachment consisting of seven counts of misconduct. A majority of the State Senate voted against Larsen in five of the seven counts but only one charge garnered the two-thirds majority needed to convict.

Under the 1874 Constitution and until the Pennsylvania state constitution of 1968, Supreme Court justices were elected to 21 year terms. At the time, it was the longest term of any elected office in the United States.

Main page: List of justices of the Supreme Court of Pennsylvania

All content from Kiddle encyclopedia articles (including the article images and facts) can be freely used under Attribution-ShareAlike license, unless stated otherwise. Cite this article:
Supreme Court of Pennsylvania Facts for Kids. Kiddle Encyclopedia.