Kids Encyclopedia Facts
Not to be confused with Centre Region Council of Governments.

Centre County is a county located in the U.S. state of Pennsylvania. As of the 2010 census, the population was 153,990. Its county seat is Bellefonte. Centre County comprises the State College, PA Metropolitan Statistical Area.

The lands of the future Centre County were first recorded by James Potter in 1764. Having reached the top of Nittany Mountain, and "....seeing the prairies and noble forest beneath him, cried out to his attendant, 'By heavens, Thompson, I have discovered an empire!'" Centre County was created on February 13, 1800, from parts of Huntingdon, Lycoming, Mifflin, and Northumberland counties and named for its central location in the state.

There were 57,573 households out of which 23.3% had children under the age of 18 living with them, 44.6% were married couples living together, 3.3% had a male householder with no wife present, 6.4% had a female householder with no husband present, and 45.7% were non-families. 28.7% of all households were made up of individuals and 8.3% had someone living alone who was 65 years of age or older. The average household size was 2.38 and the average family size was 2.91. 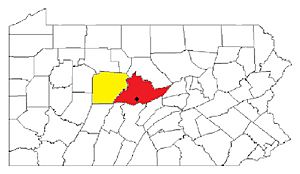 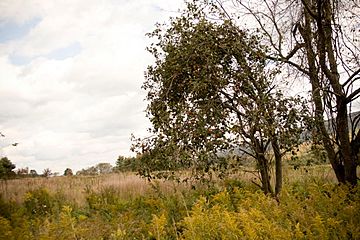 An apple tree and meadow at Bald Eagle State Park 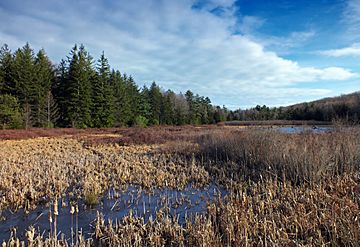 There are six Pennsylvania state parks in Centre County. 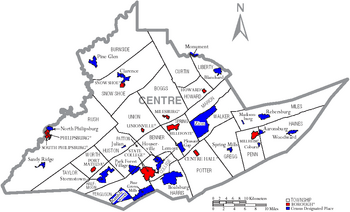 The population ranking of the following table is based on the 2010 census of Centre County.

All content from Kiddle encyclopedia articles (including the article images and facts) can be freely used under Attribution-ShareAlike license, unless stated otherwise. Cite this article:
Centre County, Pennsylvania Facts for Kids. Kiddle Encyclopedia.