The park is named for the Lenape chief, Woapalanne, meaning bald eagle. Chief Woapalanne lived in the area for a brief period of time during the mid-18th century in a village that was on Bald Eagle Creek Path, part of the much more extensive Great Indian Warpath that stretched from New York into the Carolinas. This path was used by the Iroquois to conduct raids on the Cherokee in North Carolina, South Carolina, Tennessee, and Georgia. Pennsylvania Route 150 follows this path in some areas near Bald Eagle State Park. 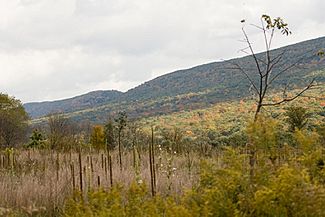 Bald Eagle Mountain, which was stripped of old growth timber during the lumber era and is now covered with a second growth forest

Bald Eagle Creek is one of the few navigable tributaries of the West Branch Susquehanna River in Centre County. This made it a vital part of the transportation network in Centre County's early days. The Bald Eagle and Spring Creek Navigation canal was built from the Pennsylvania Canal at Lock Haven up Bald Eagle Creek and Spring Creek into Bellefonte in 1848. This canal was damaged by flooding in 1867 and went out of service. It was replaced by the Bald Eagle Valley Railroad, which completed its line along the valley in 1865.

The availability of transportation and vast natural resources drew the iron industry and later the lumber industry to Bald Eagle Valley. The Eagle Ironworks was built in 1810 by Roland Curtin, an immigrant from Ireland. The ironworks produced iron along Bald Eagle Creek until it was closed in 1922. At first charcoal was used to fire the furnaces. This charcoal was produced locally by colliers who harvested timber from the mountainsides and slowly burned the logs to produce charcoal. Later the furnaces were adapted to use coal, another of Pennsylvania's plentiful natural resources.

The demand for lumber products reached the Bald Eagle area in the mid-to-late 19th century. Vast stands of old-growth forest were harvested and sent down the West Branch Susquehanna River to the sawmills at Williamsport. The once abundant stands of pine, oak, hickory, chestnut and hemlock were stripped from the hills and valleys. The land in the valley was converted to farmland and is still farmed today. The forests on Bald Eagle Mountain have since regrown forming an extensive second growth forest. 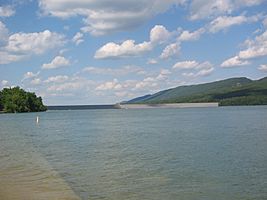 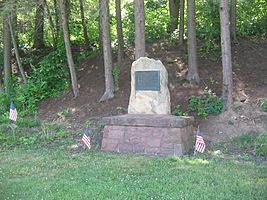 Memorial to Foster Joseph Sayers in the park

The lake is named for Foster Joseph Sayers a World War II hero. Sayers grew up in Marsh Creek. He received the Medal of Honor for acts of bravery on November 12, 1944 near Thionville, France. His Medal of Honor citation reads as follows:

CITATION: Rank and organization: Private First Class, U.S. Army, Company L, 357th Infantry, 90th Infantry Division. Place and date: Near Thionville, France, 12 November 1944. Entered service at: Howard, Pa. Birth: Marsh Creek, Pa. G.O. No.: 89, 19 October 1945. Citation: He displayed conspicuous gallantry above and beyond the call of duty in combat on 12 November 1944, near Thionville, France. During an attack on strong hostile forces entrenched on a hill he fearlessly ran up the steep approach toward his objective and set up his machinegun 20 yards from the enemy. Realizing it would be necessary to attract full attention of the dug-in Germans while his company crossed an open area and flanked the enemy, he picked up his gun, charged through withering machinegun and rifle fire to the very edge of the emplacement, and there killed 12 German soldiers with devastating close-range fire. He took up a position behind a log and engaged the hostile infantry from the flank in an heroic attempt to distract their attention while his comrades attained their objective at the crest of the hill. He was killed by the very heavy concentration of return fire; but his fearless assault enabled his company to sweep the hill with minimum of casualties, killing or capturing every enemy soldier on it. Pfc. Sayers' indomitable fighting spirit, aggressiveness, and supreme devotion to duty live on as an example of the highest traditions of the military service.

Unlimited horsepower motorboats are permitted on Foster Joseph Sayers Reservoir. Boats equipped with inboard engines with over the transom or straight-stack type exhausts are not permitted. All boats must have current registration with any state. Boaters must adhere to the speed-limit of 45 mph (72 km/h) and follow the counterclockwise pattern when navigating the lake. The marina has 369 docking slips that are available to rent seasonally or daily. Inland Marine and Power Sports operates the marina and provides various services to the public.

There are six boat launches at Bald Eagle State Park. All are open 24 hours with parking and restroom facilities.

Foster Joseph Sayers Reservoir is a warm water fishery. Fishing is permitted from the shore, on boats and from an ADA accessible pier located at the main boat launch in the central park area. The common game fish are largemouth and smallmouth bass, crappie, yellow perch, and channel catfish. Tiger muskellunge have not been stocked in this lake for at least 10 years. They were briefly introduced to take care of a non-native species, which are no longer a threat. 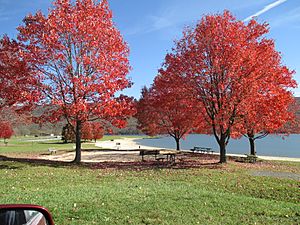 trees near the beach in the fall

There are four picnic area at Bald Eagle State Park.

Hunting is permitted on about 4,910 acres (1,990 ha) of Bald Eagle State Park. The most common game species are squirrels, turkey, rabbits, pheasant and white-tailed deer. The hunting of groundhogs is prohibited. Hunters are expected to follow the rules and regulations of the Pennsylvania Game Commission. 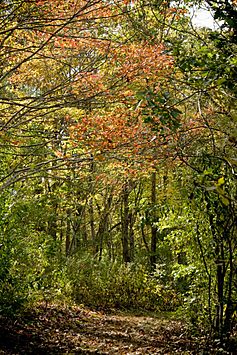 Bald Eagle State Park has 11 miles (18 km) of trails that are open for hiking and cross-country skiing. Some of the trails pass through areas that are open to hunting and hikers and skiers are asked to wear blaze orange when using the trails during the hunting seasons. All trails are open year-round at 8:00 a.m. and are closed at sunset.

Russel P. Letterman campground is a modern campground with 97 campsites, three cottages, two yurts, hot showers, an amphitheater, a sanitary dump station and two volleyball courts. There is a paved parking area at each campsite as well as a picnic table and fire ring. All campsites have an electrical hook-up. The primitive camping area 35 walk-in sites and 35 sites for small campers. Outhouses are available as well as sinks with running water.

The following state parks are within 30 miles (48 km) of Bald Eagle State Park:

All content from Kiddle encyclopedia articles (including the article images and facts) can be freely used under Attribution-ShareAlike license, unless stated otherwise. Cite this article:
Bald Eagle State Park Facts for Kids. Kiddle Encyclopedia.