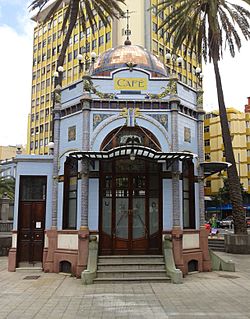 Kiosk in the form of a café. Gran Canaria.

Kiosk in English-speaking countries means a small booth offering goods and services. For example, it might sell packaged food, drinks, cigarettes and newspapers. They can still be seen on some train stations.

In Paris the old kiosks which sold newspapers, cigarettes and tickets are being replaced. The replacements are said to be more functional but less charming.

In oriental countries like Persia or Turkey, it means a building which is rather more larger and grander than that. It is a self-standing building (a separate building).

All content from Kiddle encyclopedia articles (including the article images and facts) can be freely used under Attribution-ShareAlike license, unless stated otherwise. Cite this article:
Kiosk Facts for Kids. Kiddle Encyclopedia.