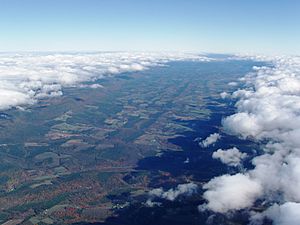 A wave window over the Bald Eagle Valley looking north from Port Matilda. The Allegheny Front, which forms the wave, is under the left edge of the window

The Bald Eagle Valley lies in the central portion of Centre County and the southern portion of Clinton County. It runs from Port Matilda down to Lock Haven PA, It includes most of the Bald Eagle Area School District and Bald Eagle Township. The Bald Eagle State Park is also in the valley. The park includes the Joseph Foster Sayers Reservoir, around the town of Howard, a prominent topographic feature formed by damming Bald Eagle Creek. 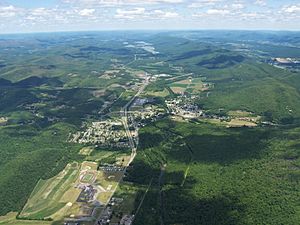 Bald Eagle Valley looking northeast from Wingate. The Bald Eagle High School is at the lower left and the Bald Eagle State Park is near the top center.

From Southwest to Northeast, down stream along the Bald Eagle Creek:

In the upper valley, the Bald Eagle Creek runs at the foot of the ridge in a narrow floodplain. Long narrow farm fields lie along the river, and along the perpendicular side vallies of the creek's tributaries. Smaller irregular sloped fields also lie on the small hills near the floodplain. Further down stream, the flood plain becomes wider, and larger farm fields are found there. Between the flood plain and the plateau, there are two distinct regions. Nearer the flood plain, there are steeper wooded hills, generally not suitable for farming. Closer to the plateau, there are more gently rolling hills, with fields and pastures mixed with woodlots. Corn, hay, alfalfa, and winter wheat are crops commonly grown in the valley. 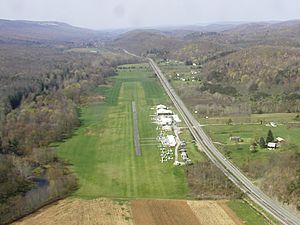 The Ridge Soaring Gliderport in the Bald Eagle Valley, looking southwest toward Julian. Bald Eagle Mountain and Bald Eagle Creek are on the left, the Nittany and Bald Eagle Railroad and U.S. Route 220 are in the lower right, and the Allegheny Front is on the top right

U.S. Alternate Route 220, the main route along the valley, ran along the flood plain, but the main route designation has been relocated to the Nittany Valley north of Port Matilda in conjunction with the ongoing extension of US Interstate 99 to Interstate 80. The road north of there is now known as U.S. 220 Alternate. I-80 runs east-west across the valley between Snow Shoe, Pennsylvania and Bellefonte, Pennsylvania. U.S. Route 322, Skytop Mountain Road, also crosses the valley through Port Matilda, and across the ridge in a cut at "Skytop". I-99 runs through the upper valley mostly along the ridge, then wraps around Port Matilda to pick up U.S. 322 in a tandem alignment, before crossing the ridge in the now expanded Skytop cut.

The Bald Eagle and Spring Creek Navigation began building up the Bald Eagle Valley from Lock Haven in 1834. It reached Howard in 1837, but construction stalled, and it only reached Milesburg in 1847, and Bellefonte in 1848. Initially successful, the canal began to face railroad competition during the American Civil War, and was not rebuilt after its destruction by flooding in 1865.

Ridge Soaring Gliderport, the only airport in the valley, is active (except in winter) with pilot training and glider rides. The former Peterson Memorial Airport, near Tyrone, closed in 1976, and was converted to an industrial park.[2]

Bald Eagle Valley is in the western part of the Ridge and Valley province of the Appalachian Mountains. During the Appalachian orogeny, sedimentary rock layers on the supercontinent of Pangaea were folded, forming a huge mountain range. The Nittany Arch was an ancient Himalayan-scale mountain that once towered above what is now the adjacent Nittany Valley.

The oldest rock layers from deep within the eroded mountain are now exposed on the east side of the Bald Eagle ridge. Younger rocks from the outer layers of the arch are exposed in the Bald Eagle Valley, with the youngest at the foot of the Allegheny Front. The rock layers in the valley were folded from horizontal to almost vertical, and now read like pages in a geologic history book covering the entire Devonian period. The vertical attitude of the rocks also contributes to the straightness of the valley. [3]

Erosion resistant Silurian Tuscarora Formation Quartzite left the Bald Eagle ridge standing above the valley. The Bald Eagle Creek runs at the foot of the ridge on a bed of Devonian Hamilton Group Shale. Durable Lock Haven Formation Mudstone forms a parallel series of steep elongated knolls running west of the floodplain, some almost as high as the ridge. Catskill Formation Sandstone underlies a series of lower gently rolling hills at the foot of the plateau, which is in turn formed from uplifted Mississippian Sandstone.

All content from Kiddle encyclopedia articles (including the article images and facts) can be freely used under Attribution-ShareAlike license, unless stated otherwise. Cite this article:
Bald Eagle Valley Facts for Kids. Kiddle Encyclopedia.