Kids Encyclopedia Facts
Not to be confused with Happy Valley, Pennsylvania. 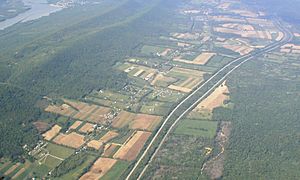 The Little Nittany Valley, looking north from Bellefonte. Sand Ridge is to the right, Bald Eagle Mountain is on the left, and Interstate 80 is in-between.

The Keystone Shortway, now Interstate 80, runs diagonally across the Nittany Valley on a west to east line, from Curtin Gap east of Milesburg, Pennsylvania, to a natural gap in Mount Nittany and then via a deep rock cut along the Long Run stream. The Nittany and Bald Eagle Railroad short line spur that enters the valley from Milesburg, then runs along Spring Creek to Bellefonte, splits, with a track going northeast to Pleasant Gap and another going southwest to Lemont and State College. The spur to Bellefonte follows Pennsylvania Route 144 and the line from Lemont to Pleasant Gap follows Pennsylvania Route 26. Route 26 is the primary north to south route through the valley, and the Interstate 99 extension will also run along its new alignment to I 80.

Nittany Valley is in the western part of the Ridge and Valley province of the Appalachian Mountains. During the Appalachian orogeny, the sedimentary rock layers folded up into the Nittany Arch anticline. The arch was an ancient Himalayan scale mountain that towered above what is now the valley. The oldest rock layers from deep within the eroded mountain are now exposed on Sand Ridge in the middle of the valley. Younger rocks from the outer layers of the arch are exposed on the West side of the Bald Eagle ridge in the Bald Eagle Valley, with the youngest across that valley at the foot of the Allegheny Front. The Nittany Valley, formed in the area where the mountain once stood, is an example of inverse topography.

All content from Kiddle encyclopedia articles (including the article images and facts) can be freely used under Attribution-ShareAlike license, unless stated otherwise. Cite this article:
Nittany Valley Facts for Kids. Kiddle Encyclopedia.