Kids Encyclopedia Facts
Not to be confused with Nittany Valley or Centre County, Pennsylvania.
This page is about the region. For the core borough, see State College, Pennsylvania.

The name "Happy Valley" is the name given to the area since the Great Depression of the 1930s as the area was generally not hit hard financially because of the presence of Pennsylvania State University. Though the term "Happy Valley" is generally synonymous with State College Borough, the region also includes the townships of College, Harris, Patton, and Ferguson. 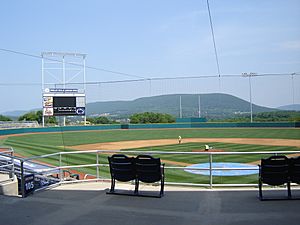 The culture of Happy Valley is largely dominated by Penn State University. The activities that occur in this region largely surround the student activities, such as "student arrivals", football Saturdays, Homecoming, and graduation. Though the region is also home to the State College Spikes, a minor league baseball team, the area is most known for the Penn State Nittany Lions football team.

During the summer session, the student population is known to return to their home towns thus reducing the population significantly. During this time, the Central Pennsylvania Festival of the Arts, usually referred to as "Arts Fest", is held for five days and draws many visitors to town during what would otherwise be a quiet period. Streets are closed off and lined with booths where people can buy paintings, pottery, jewelry, and other hand-made goods. There are also numerous musical performances and plays to take in, and food vendors selling everything from funnel cakes to Indian cuisine.

The Penn State IFC/Panhellenic Dance Marathon, commonly referred to as THON, is a 46-hour Dance Marathon that takes place every February on the University Park campus with the purpose of raising money for the Four Diamonds Foundation. A number of events throughout the year pave the way to February's THON weekend.

Blue-White Football Weekend occurs in April and includes a carnival, fireworks, food vendors, the student entertainment stage, live music, a parade, and more. On game day, an autograph session with the football student-athletes is held in Beaver Stadium, prior to kickoff of the Blue-White football intrasquad scrimmage game.

According to the 2010 census, approximately 34% of the population consists of people between the ages 20-34.

All content from Kiddle encyclopedia articles (including the article images and facts) can be freely used under Attribution-ShareAlike license, unless stated otherwise. Cite this article:
Happy Valley (Pennsylvania) Facts for Kids. Kiddle Encyclopedia.