Bellefonte is a borough and the county seat of Centre County in the U.S. state of Pennsylvania. It lies about twelve miles northeast of State College and is part of the State College, Pennsylvania Metropolitan Statistical Area. The borough population was 6,187 at the 2010 Census. It houses the courthouse located downtown on the square. Bellefonte has also been home to five of Pennsylvania's governors as well as two other governors. All seven are commemorated in a monument overlooking Talleyrand Park.

The town features many examples of Victorian architecture as well as a natural spring, from which the town gets its name ("la belle fonte") bestowed by Charles Maurice de Talleyrand-Périgord during a land-speculation visit to central Pennsylvania in the 1790s. However, the spring, which serves as the town's water supply, has been covered to comply with DEP water purity laws. The early development of Bellefonte had been as a "natural town." It started with one house and a crossroad, then iron was found and the town grew.

Bellefonte is in the northwestern corner of and is surrounded by Spring Township. 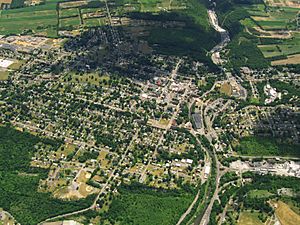 William Lamb sold his mill to John Dunlop and the next year James Dunlop, John's father, and his son-in-law James Harris laid out block by block the town that became known as Bellefonte. As the years went by, Bellefonte boomed and soon became the most influential town between Pittsburgh and Harrisburg. Bellefonte was a frequent stop in the transcontinental airmail route. The route ran from New York to San Francisco and opened August 20, 1920.

Currently Bellefonte is home to the Red Raiders, the Bellefonte School District's mascot. The school colors are red and white.

The Bellefonte Historic District was added to the National Register of Historic Places in 1977. Other buildings on the National Register of Historic Places are: Bellefonte Armory, Brockerhoff Hotel, Centre County Courthouse, Gamble Mill, McAllister-Beaver House, Miles-Humes House, Pennsylvania Match Company, South Ward School, and the William Thomas House. The Bellefonte Academy was listed until 2008, after having been destroyed by fire in 2004.

The Bush House Hotel was financed by Daniel G. Bush and built in 1868. It was one of the first hotels in the country to have electric lights. A man would stand at the train station and call out to the passengers, "Walk ya' to the Bush House." The Bush House, the Brockerhoff House, the Haag House, and some other hotels were competitors. Thomas Edison stayed at the Bush House.

In the recent years, the Bush House had several businesses in it including Schnitzels Restaurant and it held receptions of various kinds. The Bush House burned down on February 8, 2006.

Another fire heavily damaged one of the borough's other landmark buildings less than four years later. The Cadillac Building, so named because it was originally built as a Cadillac dealership in 1916, was a mix use commercial and residential property hit by a devastating fire on December 22, 2009. Christmas tree lights in one of the apartment units were determined to be the cause.

Cadillac Building is being rebuilt to hold 11 housing units, an office building to maintain properties, and a floor of community space with a completion of Fall 2016. It will remain a part of the Bellefonte Historic District.

The Garman Opera House was originally built in 1890 and hosted many notable stars of the day including George Burns and Gracie Allen, Western performer Tom Mix, and illusionist/escape artist Harry Houdini. The popular song "After the Ball" was said to have been first sung in public here. It was eventually also used as a movie theater, first showing silent films and then "talkies." By the early 1960s, the property was converted to primarily commercial/warehouse use. In the 1990s, the building was restored and returned to its roots as a live performance venue and cinema.

The opera house was severely damaged by a fire on September 9, 2012 that also destroyed the Garman House Hotel. The cause of the fire has been ruled as arson. Preservationist groups' attempts to save the Garman were unsuccessful and the building was razed in January 2014.

Garman House is being constructed to house 21 housing units with completion of Fall 2016.

The first-time visitors who walk along the Victorian streets of Bellefonte see primarily Victorian houses. One of many examples is the Hastings Mansion, which was owned by Mrs. John Lane and was bought and remodeled by Governor Daniel H. Hastings.

In the 1800s the first jail was built. It had an 8-foot underground dungeon, which was located on the rear of the lot of the present YMCA. A second jail was on East High Street.

One of the town's historic sections experienced a renaissance in 2004. The Match Factory (officially the Pennsylvania Match Company), after standing vacant since 1947, was being renovated by the American Philatelic Society as their new home, one building at a time. The site was placed on the National Register of Historic Places in 2001 and the town was anxious to find an appropriate owner for the historic property.

All content from Kiddle encyclopedia articles (including the article images and facts) can be freely used under Attribution-ShareAlike license, unless stated otherwise. Cite this article:
Bellefonte, Pennsylvania Facts for Kids. Kiddle Encyclopedia.