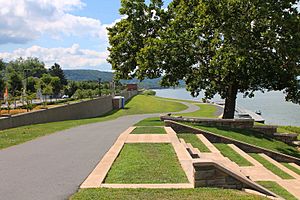 Thomas Edison features in the town's history, and the historic Edison Hotel was renamed in his honor. Other historic sites include the Beck House, Northumberland County Courthouse, and Sunbury Historic District, all listed on the National Register of Historic Places. Sunbury is the principal city in the Sunbury, PA Micropolitan Statistical Area and one of three principal cities in the Bloomsburg-Berwick-Sunbury, PA Combined Statistical Area. 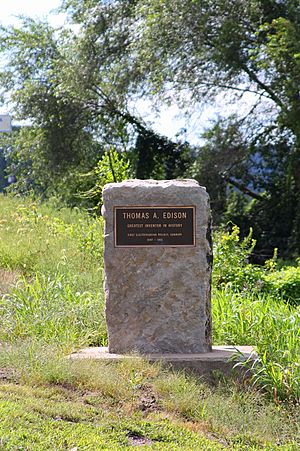 Monument to Thomas Edison near Sunbury

The first human settlement of Sunbury was probably Shawnee migrants. A large population of Delaware Indians was also forcibly resettled there in the early 18th century after they lost rights to their land in the Walking Purchase. Canasatego of the Six Nations, enforcing the Walking Purchase of behalf of George Thomas, Deputy Governor of Pennsylvania, ordered the Delaware Indians to go to two places on the Susquehanna River, one of which was present-day Sunbury.

From 1727 to 1756, Sunbury was one of the largest and most influential Indian settlements in Pennsylvania. At that time, it was known as Shamokin, not to be confused with the present-day city of Shamokin, Pennsylvania, which is located to the east. In 1745, Presbyterian missionary David Brainerd described the city as being located on both the east and west sides of the river, and on an island, as well. Brainerd reported that the city housed 300 Indians, half of which were Delawares and the other Seneca and Tutelo.

In 1754, much of the land west of the Susquehanna was transferred from the Six Nations to Pennsylvania at the Albany Congress. However, Shamokin was not sold and was reserved by the Six Nations, "to settle such of our Nations as shall come to us from the Ohio or any others who shall deserve to be in our Alliance." According to Weslager, "the Pennsylvania authorities had no opposition to the Six Nations reserving Wyoming and Shamokin from the sale, since friendly Delawares, including Teedyuskung (also known as Teedyuscung) and his people living in those settlements--and any other Indians who might be placed there--constituted a buffer against Connecticut."

The French and Indian War brought fighting to much of the region. The Delaware Indian residents of Shamokin remained neutral for much of the early part of the war, in part because a drought and unseasonable frost in Shamokin in 1755 left them without provisions. However, the Delaware Indians at Shamokin joined the war against Pennsylvania and the English after the Gnadenhutten massacre in 1755. Pennsylvania Fort Augusta was built in 1756 at Shamokin. Read more about early history of Sunbury in Shamokin (village).

On March 21, 1772, Northumberland County was incorporated and subdivided. The settlement of Shamokin was renamed Sunbury that same year, and the present-day city of Sunbury identifies 1772 as the date of its establishment. It was named after Sunbury-on-Thames, a town in the Surrey borough of Spelthorne, England, just outside Greater London.

Lorenzo Da Ponte, the librettist of Mozart and of Salieri, lived in Sunbury for some years after his arrival in America. Thomas Edison installed the first successful three-wire electric lighting system in July 1883 at what was then known as the City Hotel. At the city's 150th anniversary celebration in 1922, it was renamed the Edison Hotel. 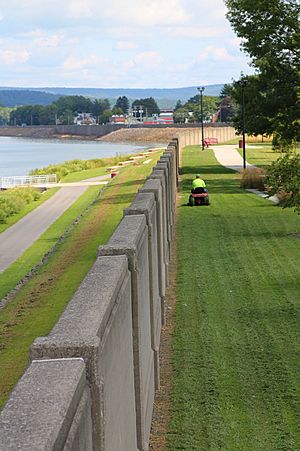 Sunbury is the largest principal city of the Sunbury-Lewisburg-Selinsgrove, Pennsylvania, a Combined Statistical Area that includes the Sunbury (Northumberland County), Lewisburg (Union County), and Selinsgrove (Snyder County) micropolitan areas, which had a combined population of 173,726 at the 2000 census.

Weis Markets, a regional supermarket chain operating in seven states, is headquartered in Sunbury. The company is a significant employer in the city and the region.

Great Coasters International is a world-known roller coaster design and manufacturing firm and lists its contact address in Sunbury, though it is located outside of the city limits.

Sunbury Motor Company is a family-owned and -operated company since 1915; it is on North 4th Street.

The Northumberland County Historical Society maintains the Charlotte Darrah Walter Genealogical Library. It contains material on local history along with thousands of records of early families from Northumberland County and surrounding counties. Access to records is on a fee basis. The permanent exhibits deal with the site in prehistoric times, at the time of the Moravian Mission and blacksmith shop, and Fort Augusta during the French and Indian War and later under the Americans, during the Revolutionary War.

In the episode titled "Nixon vs. Kennedy" in first season of the AMC cable drama Mad Men a train supposedly carrying the unrecognizable body of Pvt. Dick Whitman, who was killed in the Korean War, arrives in Sunbury. The escort officer with the casket is said to be Lt. Don Draper, and the casket is met by Dick Whitman's adoptive mother, his half brother, Adam and his mother's second husband. In fact, the person killed in Korea was Don Draper, and Dick Whitman has switched identities with Draper. Though Dick Whitman posing as Draper attempts to hide, Adam Whitman sees him, recognizes him, and chases the train as it leaves the station.

The extensive Sunbury Riverfront Park Project is in the planning and implementation stages in Sunbury. An extensive floodwall protection system was designed and built by the US Army Corps of Engineers in 1951. Additional height was added to the wall in 2003. The system has provided protection from 15 major flood events over the past 50 years. In 1972, flood waters from Hurricane Agnes crested at 35.8 feet (10.9 m) at Sunbury, two feet higher than the crest in 1936. The wall held back the water and residents showed their gratitude in messages they wrote on the wall.

Hurricane Agnes in late June 1972 was blamed for 10 deaths in Lancaster County, eight in Dauphin County, five in York County and four in both Northumberland and Luzerne counties, according to the Susquehanna River Basin Commission.

Additionally, a multimillion-dollar fish ladder is being built across the river in Shamokin Dam to mitigate the impediment of the shad migration up the Susquehanna River caused by the annual inflation of the Adam T. Bower Fabri Dam.

The Adam T. Bower Memorial Dam, an inflatable fabric-tube dam barrage impounding the Susquehanna River, creates the 3,000 acres (12 km2) Augusta Lake for recreation. It is inflated in May and deflated in the fall. The new waterfront development in Sunbury will provide a marina with transient boat docks, walking trails, gardens, an amphitheater and a new accessible fishing pier. Three acres of land will be added to the river side of the flood wall.

The city offers baseball fields, a skating park, tennis courts, playgrounds, a community pool and a small park that is next to the county courthouse, in the downtown area.

A vacant building in the Shikellamy State Park along the river is under consideration for redevelopment as an environmental research and education center. Designed in the 1960s, the facility was originally the Basse Beck Environmental Center. It has been empty for several years.

All content from Kiddle encyclopedia articles (including the article images and facts) can be freely used under Attribution-ShareAlike license, unless stated otherwise. Cite this article:
Sunbury, Pennsylvania Facts for Kids. Kiddle Encyclopedia.