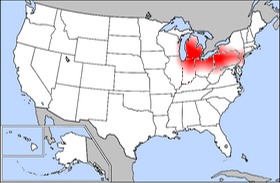 The Rust Belt refers to an area of the north central United States. The area is mostly the states near the Great Lakes. This area was once known for steel production and heavy industry. That industry has greatly decreased since the middle of the 20th century. Much of this decrease is because of the United States using manufacturers from other countries.

Most Rust Belt cities, for example, Pittsburgh, Pennsylvania and Youngstown, Ohio, have had very large decrease in population since the 1950s and 1960s.

All content from Kiddle encyclopedia articles (including the article images and facts) can be freely used under Attribution-ShareAlike license, unless stated otherwise. Cite this article:
Rust Belt Facts for Kids. Kiddle Encyclopedia.