Steubenville is a city in and the county seat of Jefferson County, Ohio, United States. Located along the Ohio River, it had a population of 18,659 at the 2010 census. The city's name is derived from Fort Steuben, a 1786 fort that sat within the city's current limits and was named for German-Prussian military officer Baron Friedrich Wilhelm von Steuben. Today, a replica of the fort is open to the public.

Steubenville is known as the "City of Murals", after its more than 25 downtown murals. It is home to Franciscan University of Steubenville and Eastern Gateway Community College. Steubenville is a principal city of the Weirton-Steubenville, WV-OH Metropolitan Statistical Area, which had a population of 124,454 residents. 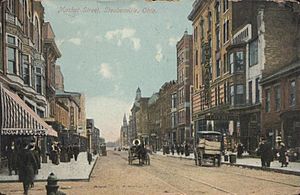 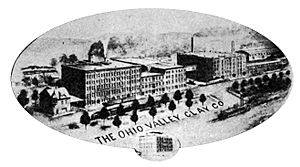 In 1786–87, the soldiers of the 1st American Regiment built Fort Steuben to protect the government surveyors mapping the land west of the Ohio River, and named the fort in honor of Baron Friedrich Wilhelm von Steuben. When the surveyors completed their task a few years later, the fort was abandoned. In the meantime, settlers had built homes around the fort; they named their settlement Steubenville. The name Steubenville was derived from Fort Steuben to honor Baron von Steuben (the fort was named for the Baron). The town was sometimes referred to as La Belle City, a franglais interpretation of "The Beautiful City".

On July 29, 1797, Jefferson County was organized by a proclamation of Governor Arthur St. Clair, and Steubenville was selected as the County seat and was platted in the same year by Bezaliel (Bezaleel) Wells and James Ross, the city's co-founders. Wells, a government surveyor born in Baltimore, received about 1,000 acres (4 km2) of land west of the Ohio River; Ross, a lawyer from Pittsburgh, owned land north of his.

On March 1, 1803, Ohio was admitted to the Union as the 17th state. During the first half of the nineteenth century, Steubenville was primarily a port town, and the rest of the county was small villages and farms. Steubenville received a city charter in 1851. In 1856, Frazier, Kilgore and Company erected a rolling mill (the forerunner of steel mills) and the Steubenville Coal and Mining Company sank a coal shaft. The city was a stop along the Pittsburgh, Cincinnati, Chicago and St. Louis Railroad, which connected Pittsburgh to Chicago and St. Louis. 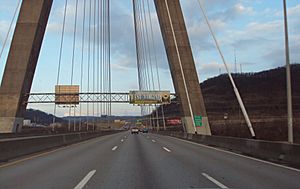 The Veterans Memorial Bridge connects Steubenville to Weirton, West Virginia across the Ohio River and is the border crossing between the states of West Virginia and Ohio on U.S. Highway 22.

The city's population peaked in 1940 and has been in continuous decline since. The 2010 census found 18,659 residents, down 1.8 percent from the 2000 census, while the 2011 estimate put the population at 18,440, a drop of another 1.2 percent since 2010. The poverty rate increased to 27.5 percent of the population. The proportion of the population that is white remained at 79.5 percent, while the Hispanic proportion more than doubled to 2.4 percent as the black population dropped to 15.9 percent.

From 1980 to 2000, census figures show that the Weirton–Steubenville population decreased faster than any other urban area in the United States.

There were 7,548 households of which 25.3% had children under the age of 18 living with them, 34.8% were married couples living together, 16.2% had a female householder with no husband present, 4.8% had a male householder with no wife present, and 44.1% were non-families. 37.1% of all households were made up of individuals and 15.7% had someone living alone who was 65 years of age or older. The average household size was 2.22 and the average family size was 2.91.

Fort Steuben, located downtown on South Third Street, is a reconstructed 18th century fort on its original location overlooking the Ohio River. Built in 1787 to protect the government surveyors of the Seven Ranges of the Northwest Territory, Fort Steuben housed 150 men of the 1st American Regiment. The non-profit organization that worked to rebuild the fort also developed the surrounding block into Fort Steuben Park that includes the Veterans Memorial Fountain and the Berkman Amphitheater. The Fort Steuben Visitors center is home to the Museum Shop and the Steubenville Convention & Visitors Bureau and is an official site on the Ohio River Scenic Byway.

Adjacent to the fort is the First Federal Land Office with its original logs from 1801. After the Ohio country was surveyed, it could be sold or given away as land grants; the settlers brought their deeds to be registered at the Land Office to David Hoge, the Registrar of Lands and Titles for the Northwest Territory.

"Ohio Valley Steelworker" Statue was created by artist Dimitri Akis as a tribute to the Ohio Valley Steelworkers. The life-size figure carries a long-handled dipping ladle and is wearing the hooded fire-proof suit worn in the steel mills. The statue was located at the junction of Hwy 22 (University Blvd) and Hwy 7 (Dean Martin Blvd). In the fall of 2014, the statue was moved to its new home, displayed on South Fourth Street at the site of the Public Library of Steubenville and Jefferson County.

There is a statue downtown commemorating Edwin Stanton, President Abraham Lincoln's secretary of war. Stanton was born and raised in Steubenville.

The Steubenville Parks and Recreation Department maintains over twenty parks and recreation facilities within the City. Belleview Park is the crown jewel of the department featuring five lighted softball/baseball fields, public swimming pool, tennis courts,playgrounds and shelter areas. Beatty Park, located in the south side of Steubenville is the largest of the city parks. The facility features include hiking trails, picnic shelters, a disc golf course and bird watching. North End Park, located on 7th street, features a softball diamond, new (as of 2016) playgrounds, and a picnic area. Jim Wood Park located off John Scott Highway features a walking/jogging track, baseball/softball diamond, picnic areas and splash pad. The Martin Luther King Recreation Center, located at 905 Market Street is a free facility for residents of the city to enjoy basketball, programs and activities, a meeting/activity space as well as the offices to the Parks and Recreation Department. Murphy's Field/Rotary Park located off Plum Street, features a baseball diamond, shelter house and playground. Several smaller tot lot type parks dot the city. The department employs one full time staff member, a director and three part time recreation aides. Maintenance of the parks and facilities was turned over to the M&R Department in the fall of 2016. Previously the work was completed by two full time maintenance workers. The department hosts a variety of programs during the year including Daddy Daughter Date Night, Community Halloween Party and Breakfast with Santa. Smaller programs are held throughout the year at various park locations.

The climate in this area is characterized by relatively high temperatures and evenly distributed precipitation throughout the year. According to the Köppen Climate Classification system, Steubenville has a Humid subtropical climate, abbreviated "Cfa" on climate maps.

All content from Kiddle encyclopedia articles (including the article images and facts) can be freely used under Attribution-ShareAlike license, unless stated otherwise. Cite this article:
Steubenville, Ohio Facts for Kids. Kiddle Encyclopedia.