Kids Encyclopedia Facts
Not to be confused with Jefferson, Ohio.

Jefferson County is a county located in the U.S. state of Ohio. As of the 2020 census, the population was 65,249. Its county seat is Steubenville. The county is named for Thomas Jefferson, who was vice president at the time of its creation.

Jefferson County is part of the Weirton-Steubenville, WV-OH Metropolitan Statistical Area, which is also included in the Pittsburgh-New Castle-Weirton, PA-WV-OH Combined Statistical Area.

Jefferson County was organized on July 29, 1797 by proclamation of Governor Arthur St. Clair, six years before Ohio was granted statehood.

In 1786, the United States built Fort Steuben to protect the government surveyors mapping the land west of the Ohio River. When the surveyors completed their task a few years later, the fort was abandoned. In the meantime, settlers had built homes around the fort; they named their settlement La Belle. When the County was created in 1797, La Belle was selected as the County seat. The town was subsequently renamed Steubenville, in honor of the abandoned fort.

During the first half of the nineteenth century, Steubenville was primarily a port town, and the rest of the county consisted of small villages and farms. However, in 1856, Frazier, Kilgore and Company erected a rolling mill (the forerunner of steel mills) and the Steubenville Coal and Mining Company sank a coal shaft, resulting in Jefferson County becoming one of the leading centers of the new Industrial Revolution.

Jefferson County's population has declined to 70% of its 1960 figure as its manufacturing base collapsed over the last few decades.

Commercial air service is available at nearby Pittsburgh International Airport to the east via U.S. Route 22. The county is served by two general aviation fields, the Jefferson County Airpark and the Eddie Dew Memorial Airpark.

Ohio Route 7 is the main north–south highway through the county. 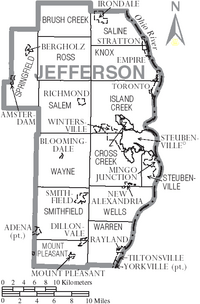 Map of Jefferson County, Ohio with Municipal and Township Labels

Carpenter's Fort, or Carpenter's Station as it was sometimes called, was established in the summer of 1781 when John Carpenter built a fortified house above the mouth of Short Creek on the Ohio side of the Ohio River in Coshocton County, but now in Jefferson County, Ohio, near Marietta, Ohio.

The population ranking of the following table is based on the 2010 census of Jefferson County.

All content from Kiddle encyclopedia articles (including the article images and facts) can be freely used under Attribution-ShareAlike license, unless stated otherwise. Cite this article:
Jefferson County, Ohio Facts for Kids. Kiddle Encyclopedia.