Kids Encyclopedia Facts
Not to be confused with Carroll, Ohio.

Carroll County is a county located in the state of Ohio. As of the 2020 census, the population was 26,721. Its county seat is Carrollton. It is named for Charles Carroll of Carrollton, the last surviving signer of the Declaration of Independence.

Carroll County is part of the Canton-Massillon, OH Metropolitan Statistical Area, which is also included in the Cleveland-Akron-Canton, OH Combined Statistical Area. It is in the Appalachian Ohio region.

Carroll County was formed on December 25, 1832 from portions of Columbiana, Harrison, Jefferson, Stark, and Tuscarawas counties.

Carroll County lies upon an ancient trail known as the Great Trail, connecting the forks of the Ohio with Lake Erie and the inland plains.

The Great Trail Festival, a festival of old fashioned music, arts and crafts, is held near the village of Malvern each year at the end of August and the beginning of September. A celebration of Ohio's colonial history, the event focuses particularly on the region's Native American and French heritage, complete with a small herd of buffalo and battle reenactment.

The Algonquin Mill Fest is another local festival. Held 4 miles south of Carrollton on SR 332 at the Algonquin Mill - a pioneer village with one room schoolhouse, steam-powered saw and flour mills, as well as several other historic buildings. Hand made arts and crafts are sold, along with flour milled during the festival, a pancake breakfast and chicken barbecue dinners. 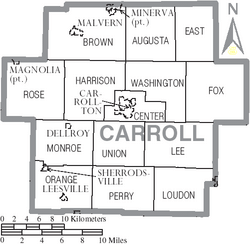 Map of Carroll County, Ohio with Municipal and Township Labels

Latest USDA data, (2007), show Carroll County led the state in nursery stock production, and was number ten among counties in the United States.

Listed as the most polluted county in Ohio. .

All content from Kiddle encyclopedia articles (including the article images and facts) can be freely used under Attribution-ShareAlike license, unless stated otherwise. Cite this article:
Carroll County, Ohio Facts for Kids. Kiddle Encyclopedia.