Columbiana County is a county located in the U.S. state of Ohio. As of the 2020 census, the population was 101,877. The county seat is Lisbon. The county name is derived from the explorer of the Americas, Christopher Columbus.

Officially considered part of the Youngstown media market, the Steubenville market media stations regularly report in the area as well.

The principal historic Indian tribes in the area were the Wyandots, Mingoes, and Delawares. Throughout the second half of the 18th century white explorers, starting with Christopher Gist in 1750, came to the area. George Washington, while engaged in land examinations, camped in the area of present-day East Liverpool in 1774.

Columbiana County was founded in 1803 and named in honor of Christopher Columbus, taking his surname combined with "Anna". The county was the scene of one of the northern-most action fought during the American Civil War; in July 1863 Confederate raiders under John Morgan were surrounded and captured by Union forces.

The county was home to the largest pottery industry in the world, in East Liverpool & surrounding communities, which produced more than half of the United States' annual ceramics output. Throughout East Liverpool's ceramics history, there were more than 300 potteries. 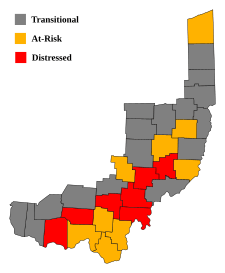 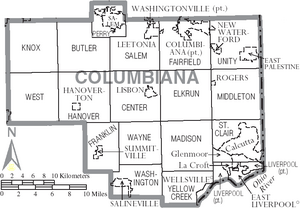 Map of Columbiana County, Ohio with Municipal and Township Labels

The population ranking of the following table is based on the 2010 census of Columbiana County.

All content from Kiddle encyclopedia articles (including the article images and facts) can be freely used under Attribution-ShareAlike license, unless stated otherwise. Cite this article:
Columbiana County, Ohio Facts for Kids. Kiddle Encyclopedia.