Hanoverton is a village in Hanover Township, Columbiana County, Ohio, United States. The population was 354 at the 2020 census. Hanoverton is located in the Salem, OH Micropolitan Statistical Area.

Hanoverton was laid out in 1813, and incorporated as a village in 1836. Hanoverton experienced growth in the 1830s by the building of the Sandy and Beaver Canal through the town, but by the late 1840s, the canal was no longer profitable and the town declined.

In 1977 a 23-acre area of Hanoverton was added to the National Register of Historic Places as the Hanoverton Canal Town District. The district is noted for canal-era architecture which is largely unchanged since construction in the mid-1800s.

Hanoverton also played its part in the Underground Railroad. At least one old home has a hidden room and the old Spread Eagle Tavern has an underground tunnel that goes between two buildings. This tunnel is still functional today 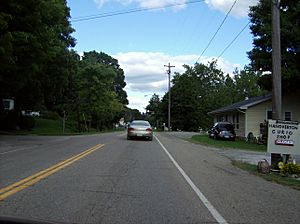 Along Canal Street in eastern Hanoverton

According to the United States Census Bureau, the village has a total area of 0.70 square miles (1.81 km2), all land.

Hanoverton lies south of Salem and west of the county seat of Lisbon.

There were 162 households, of which 30.9% had children under the age of 18 living with them, 53.1% were married couples living together, 9.9% had a female householder with no husband present, 8.0% had a male householder with no wife present, and 29.0% were non-families. 22.8% of all households were made up of individuals, and 10.5% had someone living alone who was 65 years of age or older. The average household size was 2.52 and the average family size was 2.97.

All content from Kiddle encyclopedia articles (including the article images and facts) can be freely used under Attribution-ShareAlike license, unless stated otherwise. Cite this article:
Hanoverton, Ohio Facts for Kids. Kiddle Encyclopedia.