Satellite image of Hurricane Hugo with a polar low visible at the top of the image.

They use computerized and mathematical models to make short and long-range forecasts concerning weather and climate patterns. A variety of organizations use meteorological forecasts including:

In addition to forecasting, meteorologists study the impact of weather on the environment and conduct research into weather patterns, climate change and models of weather prediction.

In the study of the atmosphere, meteorology can be divided into distinct area.

Boundary layer meteorology is the study of processes in the air layer directly above Earth's surface, known as the atmospheric boundary layer (ABL) or peplosphere. The effects of the surface – heating, cooling, and friction – cause turbulent mixing within the air layer. Significant fluxes of heat, matter, or momentum on time scales of less than a day are advected by turbulent motions. Boundary layer meteorology includes the study of all types of surface-atmosphere boundary, including ocean, lake, urban land and non-urban land.

Mesoscale meteorology is the study of atmospheric phenomena that has horizontal scales ranging from microscale limits to synoptic scale limits and a vertical scale that starts at the Earth's surface and includes the atmospheric boundary layer, troposphere, tropopause, and the lower section of the stratosphere.

Mesoscale timescales last from less than a day to the lifetime of the event, which in some cases can be weeks. The events typically of interest are thunderstorms, squall lines, fronts, precipitation bands in tropical and extratropical cyclones, and topographically generated weather systems such as mountain waves and sea and land breezes.

Synoptic scale meteorology is generally large area dynamics referred to in horizontal coordinates and with respect to time. The phenomena typically described by synoptic meteorology include events like extratropical cyclones, baroclinic troughs and ridges, frontal zones, and to some extent jets. All of these are typically given on weather maps for a specific time. The minimum horizontal scale of synoptic phenomena are limited to the spacing between surface observation stations.

Global scale meteorology is study of weather patterns related to the transport of heat from the tropics to the poles. Also, very large scale oscillations are of importance. Those oscillations have time periods typically longer than a full annual seasonal cycle, such as ENSO, PDO, MJO, etc. Global scale pushes the thresholds of the perception of meteorology into climatology. The traditional definition of climate is pushed in to larger timescales with the further understanding of how the global oscillations cause both climate and weather disturbances in the synoptic and mesoscale timescales. 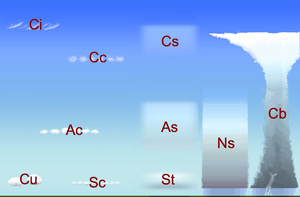 Cloud classification by altitude of occurrence

Aviation meteorology deals with the impact of weather on air traffic management. It is important for air crews to understand the implications of weather on their flight plan as well as their aircraft, as noted by the Aeronautical Information Manual:

The effects of ice on aircraft are cumulative-thrust is reduced, drag increases, lift lessens, and weight increases. The results are a decrease in stall speed and a deterioration of aircraft performance. In extreme cases, 2 to 3 inches of ice can form on the leading edge of the airfoil in less than 5 minutes. It takes but 1/2 inch of ice to reduce the lifting power of some aircraft by 50 percent and increases the frictional drag by an equal percentage.

Meteorologists, soil scientists, agricultural hydrologists, and agronomists are persons concerned with studying the effects of weather and climate on plant distribution, crop yield, water-use efficiency, phenology of plant and animal development, and the energy balance of managed and natural ecosystems. Conversely, they are interested in the role of vegetation on climate and weather.

Hydrometeorology is the branch of meteorology that deals with the hydrologic cycle, the water budget, and the rainfall statistics of storms. A hydrometeorologist prepares and issues forecasts of accumulating (quantitative) precipitation, heavy rain, heavy snow, and highlights areas with the potential for flash flooding. Typically the range of knowledge that is required overlaps with climatology, mesoscale and synoptic meteorology, and other geosciences. 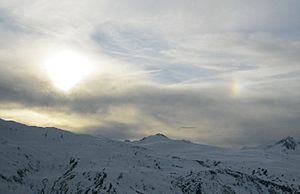 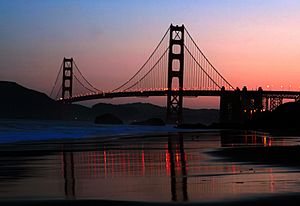 The arrival of the electrical telegraph in 1837 afforded, for the first time, a practical method for quickly gathering surface weather observations from a wide area. This data could be used to produce maps of the state of the atmosphere for a region near the Earth's surface and to study how these states evolved through time.

To make frequent weather forecasts based on this data required a reliable network of observations, but it was not until 1849 that the Smithsonian Institution began to establish an observation network across the United States under the leadership of Joseph Henry . Similar observation networks were established in Europe at this time.

In 1854, the United Kingdom government appointed Robert FitzRoy to the new office of Meteorological Statist to the Board of Trade with the role of gathering weather observations at sea. FitzRoy's office became the United Kingdom Meteorological Office in 1854, the first national meteorological service in the world. The first daily weather forecasts made by FitzRoy's Office were published in The Times newspaper in 1860. The following year a system was introduced of hoisting storm warning cones at principal ports when a gale was expected.

Understanding the kinematics of how exactly the rotation of the Earth affects airflow was partial at first. Late in the 19th century the full extent of the large scale interaction of pressure gradient force and deflecting force that in the end causes air masses to move along isobars was understood.

Early in the 20th century this deflecting force was named the Coriolis effect after Gaspard-Gustave Coriolis, who had published in 1835 on the energy yield of machines with rotating parts, such as waterwheels. In 1856, William Ferrel proposed the existence of a circulation cell in the mid-latitudes with air being deflected by the Coriolis force to create the prevailing westerly winds. 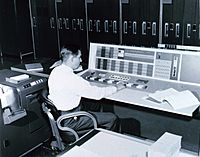 A meteorologist at the console of the IBM 7090 in the Joint Numerical Weather Prediction Unit. c. 1965

In 1904, Norwegian scientist Vilhelm Bjerknes first thought that predicting the weather is possible from calculations based upon natural laws.

Early in the 20th century, advances in the understanding of atmospheric physics led to the foundation of modern numerical weather prediction. In 1922, Lewis Fry Richardson published "Weather prediction by numerical process," which described how small terms in the fluid dynamics equations governing atmospheric flow could be neglected to allow numerical solutions to be found. However, the sheer number of calculations required was too large to be completed without the use of computers.

At this time in Norway a group of meteorologists led by Vilhelm Bjerknes developed the model that explains the generation, intensification and ultimate decay (the life cycle) of mid-latitude cyclones, introducing the idea of fronts, that is, sharply defined boundaries between air masses. The group included Carl-Gustaf Rossby (who was the first to explain the large scale atmospheric flow in terms of fluid dynamics), Tor Bergeron (who first determined the mechanism by which rain forms) and Jacob Bjerknes.

Starting in the 1950s, numerical experiments with computers became feasible. The first weather forecasts derived this way used barotropic (that means, single-vertical-level) models, and could successfully predict the large-scale movement of midlatitude Rossby waves, that is, the pattern of atmospheric lows and highs. 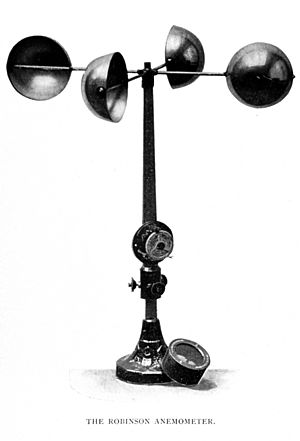 Generally speaking, each science has its own unique sets of laboratory equipment. However, meteorology is a science which does not use much lab equipment but relies more on field-mode observation equipment.

In science, an observation, or observable, is an abstract idea that can be measured and data can be taken. In the atmosphere, there are many things or qualities of the atmosphere that can be measured. Rain, which can be observed, or seen anywhere and anytime was one of the first ones to be measured historically. Also, two other accurately measured qualities are wind and humidity. Neither of these can be seen but can be felt. The devices to measure these three sprang up in the mid-15th century and were respectively the rain gauge, the anemometer, and the hygrometer.

Sets of surface measurements are important data to meteorologists. They give a snapshot of a variety of weather conditions at one single location and are usually at a weather station, a ship or a weather buoy. The measurements taken at a weather station can include any number of atmospheric observables. Usually, temperature, pressure, wind measurements, and humidity are the variables that are measured by a thermometer, barometer, anemometer, and hygrometer, respectively.

Upper air data are of crucial importance for weather forecasting. The most widely used technique is launches of radiosondes. Supplementing the radiosondes a network of aircraft collection is organized by the World Meteorological Organization.

Remote sensing, as used in meteorology, is the concept of collecting data from remote weather events and subsequently producing weather information. The common types of remote sensing are Radar, Lidar, and satellites (or photogrammetry). Each collects data about the atmosphere from a remote location and, usually, stores the data where the instrument is located. RADAR and LIDAR are not passive because both use EM radiation to illuminate a specific portion of the atmosphere.

The 1960 launch of the first successful weather satellite, TIROS-1, marked the beginning of the age where weather information became available globally. Weather satellites along with more general-purpose Earth-observing satellites circling the earth at various altitudes have become an indispensable tool for studying a wide range of phenomena from forest fires to El Niño.

In recent years, climate models have been developed that feature a resolution comparable to older weather prediction models. These climate models are used to investigate long-term climate shifts, such as what effects might be caused by human emission of greenhouse gases. 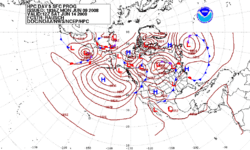 Forecast of surface pressures five days into the future for the north Pacific, North America, and north Atlantic ocean.

Once an all human endeavor based mainly upon changes in barometric pressure, current weather conditions, and sky condition, forecast models are now used to determine future conditions. Human input is still required to pick the best possible forecast model to base the forecast upon, which involves pattern recognition skills, teleconnections, knowledge of model performance, and knowledge of model biases. The chaotic nature of the atmosphere, the massive computational power required to solve the equations that describe the atmosphere, error involved in measuring the initial conditions, and an incomplete understanding of atmospheric processes mean that forecasts become less accurate as the difference in current time and the time for which the forecast is being made (the range of the forecast) increases. The use of ensembles and model consensus help narrow the error and pick the most likely outcome.

There are a variety of end users to weather forecasts. Weather warnings are important forecasts because they are used to protect life and property. Forecasts based on temperature and precipitation are important to agriculture, and therefore to commodity traders within stock markets. Temperature forecasts are used by utility companies to estimate demand over coming days. On an everyday basis, people use weather forecasts to determine what to wear on a given day. Since outdoor activities are severely curtailed by heavy rain, snow and the wind chill, forecasts can be used to plan activities around these events, and to plan ahead and survive them.

All content from Kiddle encyclopedia articles (including the article images and facts) can be freely used under Attribution-ShareAlike license, unless stated otherwise. Cite this article:
Meteorology Facts for Kids. Kiddle Encyclopedia.