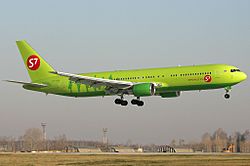 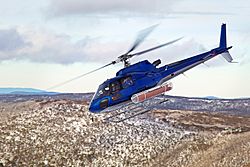 A Eurocopter AS350B helicopter in flight

Air travel is a process of going from place to place by any flying object, such as airplanes, helicopters, hot air balloons or anything that can fly.

Air travel has been a very long dream of humans from the ancient age. People seeing birds flying tried to take a flight in many ways and finally came up with balloons and machines that could fly. Air travel has added speed and cut down in travel time drastically. Today we can think of travelling around the world in 24 hours, which was never possible with any other type of transport.

Today air travel is a normal way to travel, for pleasure, personal need or business. 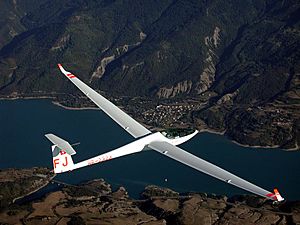 Air travel can be separated into two general classifications: national/domestic and international flights. Flights from one point to another within the same country are called domestic flights.

Flights from a point in one country to a point within a different country are known as international flights.

Travelers can use domestic or international flights in either private or public travel. 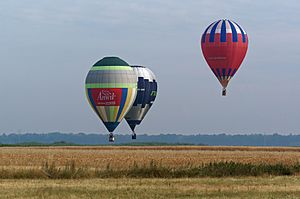 Travel class on an airplane is usually split into a two, three or four class model service. US Domestic flights usually have two classes: Economy Class and a Domestic First Class partitioned into cabins.

International flights may have up to four classes: Economy Class; Premium Economy; Business Class or Club Class; and First Class.

Most air travel starts and ends at a commercial airport. The typical procedure is check-in; border control; airport security baggage and passenger check before entering the gate; boarding; flying; and pick-up of luggage and - limited to international flights - another border control at the host country's border. 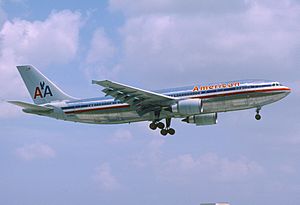 Modern aircraft consumes less fuel per person and miles travelled than cars when fully booked. This argument in favor of air travel is counter-weighted by two facts:

Instead, the scheduled flights are the main focus, resulting in a far worse fuel efficiency. 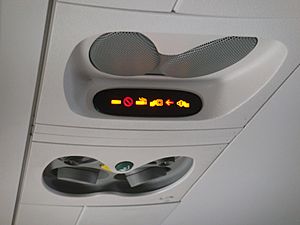 Deep vein thrombosis (DVT) is the third-most common vascular disease, next to stroke and heart attack. It is estimated that DVT affects one in 5,000 travellers on long flights. Risk increases with exposure to more flights within a short time frame and with increasing duration of flights.

During flight, the aircraft cabin pressure is usually maintained at the equivalent of 6,000–8,000 ft (1,829–2,438 m) above sea level. Most healthy travelers will not notice any effects. However, for travelers with cardiopulmonary diseases (especially those who normally require supplemental oxygen), cerebrovascular disease, anemia, or sickle cell disease, conditions in an aircraft can bring on underlying medical conditions.

Aircraft cabin air is typically dry, usually 10%–20% humidity, which can cause dryness of the mucous membranes of the eyes and airways.

All content from Kiddle encyclopedia articles (including the article images and facts) can be freely used under Attribution-ShareAlike license, unless stated otherwise. Cite this article:
Air travel Facts for Kids. Kiddle Encyclopedia.