East Liverpool is a city in southern Columbiana County, Ohio, United States. The population was 9,958 at the 2020 census. It lies along the Ohio River within the Upper Ohio Valley and borders Pennsylvania to the east and West Virginia to the south. East Liverpool is included in the Salem, OH Micropolitan Statistical Area, about 40 miles (64 km) from both Youngstown and downtown Pittsburgh.

Historically, East Liverpool was known as the "Pottery Capital" of the United States due to its large number of potteries, but due to changes in the ceramics industry, only two remain in the area. The city is also known as the hometown of former NCAA Division I football coach Lou Holtz. The Beginning Point of the U.S. Public Land Survey is just east of the city center, on the Ohio–Pennsylvania border. Because of its role in the ceramics industry, the town is one of the settings in author Holly Black's award-winning middle-grade novel Doll Bones.

East Liverpool traces its European-American settlement to 1798 when Thomas Fawcett purchased 1,100 acres of land along the Ohio River in what was then Jefferson County. In 1802 he platted the town of St. Clair, named for Arthur St. Clair, who at that time was Governor of the Northwest Territory. It was called Fawcettstown for a time by the residents. In 1816, they changed the name to Liverpool. It was incorporated as East Liverpool in 1834 when Liverpool Township in Medina County objected to possible confusion. 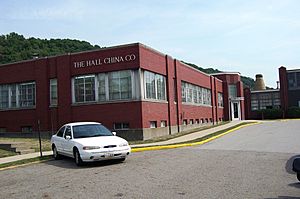 Of these potteries, three continue to operate in this area: The Hall China Company, the Homer Laughlin China Company (located across the Ohio River in Newell, West Virginia), and Pioneer Pottery. In the mid-19th century, East Liverpool also produced most of the yellowware pottery used in the United States. Among the most famous of East Liverpool's ceramics was the porcelain known as Lotus Ware. Produced by Knowles, Taylor & Knowles in the 1890s, this Moorish- and Persian-influenced artware swept the competition at the 1893 World's Fair in Chicago. It is generally considered to be the finest porcelain ever produced in the US. The Museum of Ceramics in downtown East Liverpool has the world's largest public display of Lotus Ware.

As of 1914, East Liverpool was served by the Cleveland and Pittsburgh Railroad.

The city reached its peak population of more than 26,000 in 1970, but East Liverpool's pottery industry had already begun its decline by the mid-1960s or so. As with other industries, production moved to developing countries where labor costs were cheaper. This cost many jobs and, ultimately, population in the Ohio/West Virginia area, as people moved away in search of work.

In the mid-1990s, the city renovated its downtown district. To improve its urban design, it installed Great Depression-era lightposts, developed a new center called Devon's Diamond, and reconstructed the old high school's clocktower. This building is now the home of the East Liverpool High School Alumni Association.

Though not located within the city limits, there are a few communities that share East Liverpool's 43920 ZIP code and have an East Liverpool mailing address. They are the census-designated places of Calcutta, Glenmoor and La Croft and the unincorporated community of Fredericktown.

In the bordering states of West Virginia and Pennsylvania, the communities of Chester and Newell, West Virginia and Glasgow, Pennsylvania developed and grew in relation to the growth of the pottery industry and expansion of East Liverpool in the late nineteenth and early twentieth centuries.

The Columbiana County Airport is located four miles northwest of the city.

Since the 1890s, East Liverpool and the West Virginia communities of Chester and Newell have been connected by three different bridges spanning the Ohio River.

The East Liverpool Country Club has a 9-hole golf course that was designed by Willie Park, Jr. and opened on July 14, 1921. Calcutta also features the 18-hole Turkana Golf Course.

Additionally, Beaver Creek State Park is located outside the city limits but partially within the 43920 ZIP code area.

Because of its size, East Liverpool has never had a major professional sports team. However, during the city's heyday, many semipro and company teams, and city and area leagues were thriving. Baseball, basketball and American football were all popular among residents, and games attracted many patrons. The semipro East Liverpool Potters basketball team of the Central Basketball League played in the city from 1906 to 1909. No semipro or company teams exist in the city today.

East Liverpool High School athletics have been consistently popular among students and residents in the past 100-plus years. All of the teams are known as the Potters. The school fields American football, baseball, basketball, bowling, cross country running, golf, soccer, softball, swimming, tennis, track and field, volleyball and wrestling teams. Most of these teams have had team and/or individual successes in their existences. Athletic facilities include: 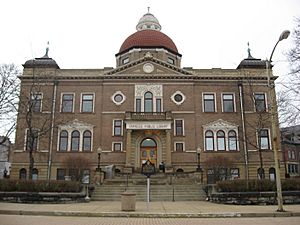 Children in East Liverpool (and immediate surrounding areas in Liverpool Township) are served by the East Liverpool City School District. The current schools in the district are:

St. Aloysius School (K-8) formerly operated for 130 years as a Roman Catholic School in the Diocese of Youngstown, before closing on June 6, 2015.

Kent State University has been operating a satellite campus, Kent State University at East Liverpool, since 1965. It is clustered around 4th Street in Downtown, and grants associate's degrees and bachelor's degrees. A trade school, New Castle School of Trades, opened in Downtown in 2016. The Ohio Valley College of Technology in nearby Calcutta also focuses on associate's degrees and job training programs.

All content from Kiddle encyclopedia articles (including the article images and facts) can be freely used under Attribution-ShareAlike license, unless stated otherwise. Cite this article:
East Liverpool, Ohio Facts for Kids. Kiddle Encyclopedia.