The university was established in 1910 as a teacher-training school. The first classes were held in 1912 at various locations and in temporary buildings in Kent and the first buildings of the original campus opened the following year. Since then, the university has grown to include many additional graduate programs of study in the arts and sciences, research opportunities, as well as over 1,000 acres (405 ha) and 119 buildings on the Kent campus. During the late 1960s and early 1970s, the university was known internationally for its student activism in opposition to U.S. involvement in the Vietnam War in 1970. 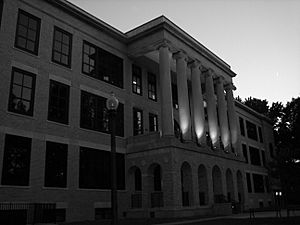 Front of Kent Hall, built in 1915, one of the oldest buildings on campus

Kent State University was established in 1910 as an institution for training public school teachers. It was part of the Lowry Bill, which also created a sister school in Bowling Green, Ohio – now known as Bowling Green State University. It was initially known under the working name of the Ohio State Normal College At Kent, but was named Kent State Normal School in 1911 in honor of William S. Kent (son of Kent, Ohio, namesake Marvin Kent), who donated the 53 acres (21 ha) used for the original campus.

The first president was John Edward McGilvrey, who served from 1912 to 1926. McGilvrey had an ambitious vision for the school as a large university, instructing architect George F. Hammond, who designed the original campus buildings, to produce a master plan. Classes began in 1912 before any buildings had been completed at the campus. These classes were held at extension centers in 25 cities around the region. By May 1913, classes were being held on the campus in Kent with the opening of Merrill Hall.

The school graduated 34 students in its first commencement on July 29, 1914. Kent State's enrollment growth was particularly notable during its summer terms. In 1924, the school's registration for summer classes was the largest of any teacher-training school in the United States. In 1929, the state of Ohio changed the name to Kent State College as it allowed the school to establish a college of arts and sciences. 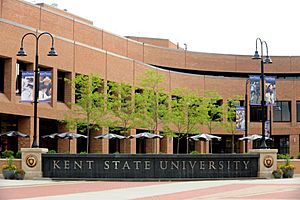 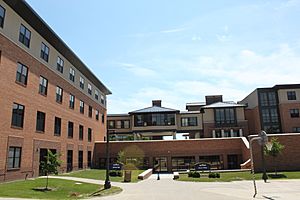 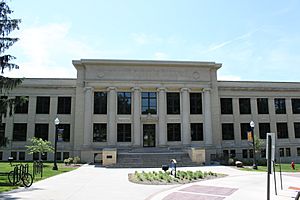 The university offers a large number of opportunities for student involvement at all its campuses, including student and professional associations, service organizations, performing ensembles, student publications, student government and club athletics.

Kent State has colleges of:

The university has an Honors College and interdisciplinary programs in Biomedical Sciences, Financial Engineering, and Information Architecture and Knowledge Management. 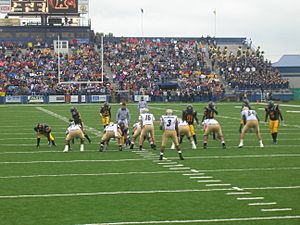 The Kent defense lines up against Akron at Dix Stadium 2006

Kent State's athletic teams are called the Golden Flashes and the school colors are shades of navy blue and gold, officially "Kent State blue" and "Kent State gold". The university sponsors 16 varsity athletic teams who compete in the National Collegiate Athletic Association (NCAA) at the Division I level with football in the Football Bowl Subdivision (FBS). 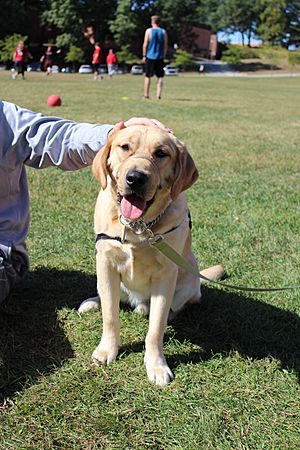 Kent State is a member of the Mid-American Conference (MAC) East division and has been a member of the conference since 1951. The university athletic facilities are mainly on campus, featuring the 25,319-seat Dix Stadium and the 6,327-seat Memorial Athletic and Convocation Center, one of the oldest arenas in Division I college basketball.

4 Paws for Ability University Program provides university students with an opportunity to foster and socialize service dogs-in-training before they begin their professional training at the 4 Paws for Ability facility in Xenia, Ohio. A chapter was founded at Kent State in August 2016 with three service dogs-in-training; it became an official organization a year later. 4 Paws for Ability Kent State has 25 dogs on campus at a time. However, the amount of sitters, co-handlers, and volunteers is not capped. The chapter has approximately 325 volunteers on their e-mail list, about 30 sitters, and over 50 co-handlers.

All content from Kiddle encyclopedia articles (including the article images and facts) can be freely used under Attribution-ShareAlike license, unless stated otherwise. Cite this article:
Kent State University Facts for Kids. Kiddle Encyclopedia.