New Philadelphia is a city in and the county seat of Tuscarawas County, Ohio, United States. The county's largest city, New Philadelphia is located on the Tuscarawas River. It is located 85 miles (137 km) south of Cleveland, 119 miles (192 km) northeast of Columbus and 90 miles (140 km) west of Pittsburgh. The population was 17,677 at the 2020 census.

In 1772, the Moravian Christians founded Schoenbrunn in the area, which was the first settlement of the Northwest Territory. The Christian pacifist settlement was subsequently abandoned during the American Revolution. After the area was resettled in 1804, because of the presence of coal and clay, early industry in the city centered on mining interests and the manufacture of steel, canned goods, roofing tile, sewer pipe, bricks, vacuum cleaners, stovepipes, carriages, flour, brooms, and pressed, stamped, and enameled goods.

New Philadelphia is a principal city in the New Philadelphia–Dover, OH Micropolitan Statistical Area, which includes all of Tuscarawas County, as well as the southern regions of Northeast Ohio. 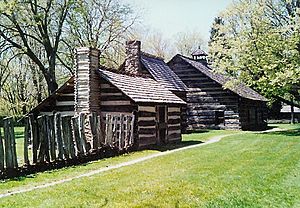 The Moravian Church founded Schoenbrunn ("beautiful spring") in 1772 as a mission to the Delaware Indians. The settlement grew to include sixty dwellings and more than 300 inhabitants who drew up Ohio's first civil code and built its first Christian church and schoolhouse. Problems associated with the American Revolution prompted Schoenbrunn's closing in 1777.

The founder, John Knisely, returned to Ohio in 1804 with his family and 33 other pioneers, he also hired surveyor John Wells to plot out New Philadelphia in the same grid style as Philadelphia, Pennsylvania.

The chief way to reach Dover is through 4th St NW, which is renamed the Boulevard in Dover. The street features four-lane streets with medians. Right before Dover it opens up and features a Wendy's, McDonald's, Arby's, and Burger King with a Taco Bell being slightly past the border. 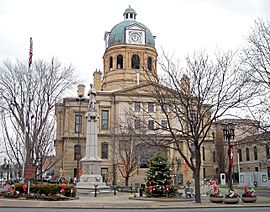 The Tuscarawas County Courthouse in New Philadelphia in 2006 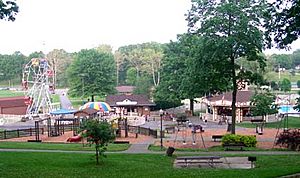 Tuscora Park in New Philadelphia features a carousel, Ferris wheel, and other rides.

Tuscora Park is a municipal park that features a carousel, Ferris wheel, train and other rides, along with miniature golf and batting cages. Tuscora Park was originally built as a project of the Works Progress Administration; original stone work gates, paths and retaining walls still adorn the park. The park is now the home of the Park Place Teen Center, a facility for high school students that provides entertainment of all types. Events at the park include a Summer Showcase and the annual First Town Days festival.

The Summer Showcase is held in the Tuscora Park Amphitheater. Events at the amphitheater include Sunday church services, plays and concerts featuring local talent. On the last day of the First Town Days festival the park hosts the U.S. Air Force Band of Flight, which plays in the amphitheater.

Around 1940, New Philadelphia purchased the Herschell-Spillman carousel secondhand. It is a rare all-wooden carousel. It includes 36 carved wooden jumping horses, two chariots and 428 individual lights. The center panels are adorned with 14 original oil paintings. Music is provided by a Wurlitzer 153 band calliope. The carousel is 40 feet in diameter and weighs 10 tons. It was manufactured in 1928 by the Spillman Manufacturing Company of North Tonawanda, New York. David Miller is well known for his 40 years of service on the Tuscora Park Carousel. The First Town Days, which includes a Grand Parade and fireworks display, runs on the weekend leading up to the Fourth of July.

The company that manages Tuscora Park is a non-profit, RTY Inc. The organization frequently hires high school and college students to operate rides and sell tickets.

Kent State University at Tuscarawas, a regional campus of Kent State University, is located in the city. The campus, which now covers 180 acres (73 ha) and four buildings, opened in 1968 and, as of September 2016, had an enrollment of 2,066 students. The campus offers 11 bachelor's and 15 associate degree programs, and students can begin any of the nearly 300 degree programs offered by Kent State. Kent State Tuscarawas is unique in that it is locally owned, the only locally owned regional campus in Ohio.

New Philadelphia has the main branch of the Tuscarawas County Public Library. The Tuscarawas County Public Library System consist of five locations: The Main Library, Bolivar Branch, Strasburg Branch, Sugarcreek Branch, Tuscarawas Branch, and a Mobile Services Department. The Main Library is located at 121 Fair Avenue just off of North Broadway Street. TCPL is a member of the SEO(Serving Every Ohioan) Library Consortium, a system with nearly two-hundred public libraries.

The city's main retail center is in and around New Towne Mall, which opened in 1988.

All content from Kiddle encyclopedia articles (including the article images and facts) can be freely used under Attribution-ShareAlike license, unless stated otherwise. Cite this article:
New Philadelphia, Ohio Facts for Kids. Kiddle Encyclopedia.