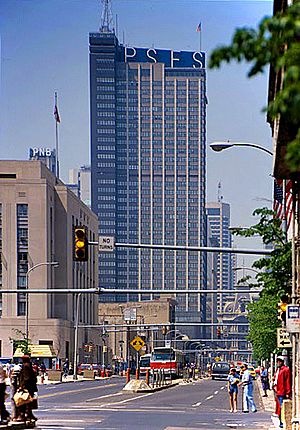 Market Street, looking west from 8th Street, in the mid-1980s 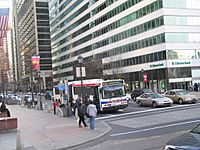 Market Street, originally known as High Street, is a major east–west street in Philadelphia, Pennsylvania. For part of its length, it serves as Pennsylvania Route 3.

The High Street was the familiar name of the principal street in nearly every English town at the time Philadelphia was founded. But if Philadelphia was indebted to England for the name of High Street, nearly every American town is, in turn, indebted to Philadelphia for its Market Street. Long before the city was laid out or settled, Philadelphia's founder, William Penn, had planned that markets would be held regularly on the 100-foot (30 m) wide High Street. The city's first market stalls were situated in the center of the thoroughfare starting at Front Street and proceeding west eventually to 8th Street. The stalls soon became covered and were not taken down as planned. Later, additional covered sheds appeared west of Center Square as the city expanded westward. The street began to be called Market Street around 1800. The road's new name was made official by an ordinance of 1858, ironically, just a year before the market sheds were ordered removed.

Market Street has been called the most historic highway in the United States because of the various historic sites along its eastern section. Many of Benjamin Franklin's activities were centered along Market Street. His house was located near the intersection of Fourth Street, and he may have performed his famous kite-flying experiment near Third and Market Streets. Thomas Jefferson wrote the Declaration of Independence in a boarding house (the Graff or Declaration House) once located at the Seventh Street intersection. The mansion of Robert Morris, financier of the American Revolution, was located near Sixth and Market Streets. This house, known as the President's House, was used by George Washington and John Adams as their residence during their terms as President. (The house was more or less on the site of the northern part of the modern-day Liberty Bell Center.) Around 1795 Theophilus Cazenove lived at Market Street. Several important finance and publishing firsts also occurred along Market Street between Second and Fourth Streets during the 18th century. Market Street is still one of the principal locations of business and commerce in Philadelphia. 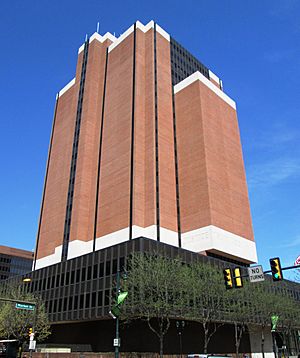 The James A. Byrne U.S. Courthouse for Eastern Pennsylvania 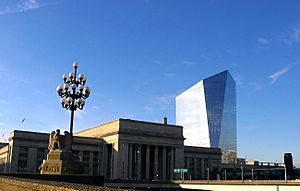 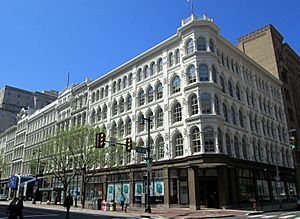 Perhaps the most famous landmark is Independence National Historical Park, at Fifth and Market Streets. Home to the Liberty Bell, Independence Hall, and National Constitution Center, the complex is the heart of Philadelphia's Old City neighborhood.

East of the intersection of Front and Market Streets lies an entrance to Penn's Landing, alongside the Delaware River.

At 2nd Street stands the historic Christ Church, once the tallest building in North America.

Philadelphia television station WTXF-TV 29 (FOX) is situated on Market Street at 4th Street. A ground-level studio with a window overlooks the street. Also located at the same intersection is CBS Radio property 94 WIP.

Adjacent to Independence Mall is the National Museum of American Jewish History, which relocated to that location in 2010 and occupies the spot once held by CBS 3 and KYW Newsradio 1060.

The Gallery at Market East shopping mall is located on Market Street between 9th and 12th Streets. Adjacent is the Pennsylvania Convention Center.

Reading Terminal, the former grand railroad station for the Reading Railroad is located on the northeastern corner of 12th and Market Streets. It now serves as the grand entrance to the Pennsylvania Convention Center.

The PSFS Building, generally regarded as the first International Style building in the US, stands at the intersection with 12th Street.

One Liberty Place, formerly Philadelphia's tallest building, is located at the southeast corner of 17th and Market Streets. (It was surpassed in height by the Comcast Center, located a block to the north, in June 2007).

30th Street Station, a major commuter rail line terminal, is located at the intersection of 30th and Market Streets.

On June 5, 2013, a building collapsed at 22nd Street, trapping a number of people under the rubble. Six people died and fourteen others were injured.

All content from Kiddle encyclopedia articles (including the article images and facts) can be freely used under Attribution-ShareAlike license, unless stated otherwise. Cite this article:
Market Street (Philadelphia) Facts for Kids. Kiddle Encyclopedia.