Millbourne, at over 16,000 people per square mile, is the most densely populated incorporated place in Pennsylvania, and 22nd in the entire United States.

According to the United States Census Bureau, the borough has a total area of 0.1 square miles (0.2 km2), all land, making it the smallest municipality in Delaware County, Pennsylvania by area.

The borough is small enough that it is entirely within walking distance of its elevated station on the Market-Frankford Line. The Millbourne station, newly rebuilt and rededicated in mid-2008, offers an 11-minute commute to University of Pennsylvania and Drexel University and a 15-minute commute to Center City. Millbourne is also within easy walking distance of the 69th Street Terminal in Upper Darby and the 63rd Street Station in West Philadelphia, both of which are on the Market-Frankford Line. The Philadelphia Inquirer reported in the early 21st century that, according to U.S. Census data, only about one-third of Millbourne workers commuted by car. There is a PhillyCarShare shared car "node" at 69th Street Station, easily accessible from Millbourne or by commuters exiting the Market Frankford El at 69th Street.

The Borough is approximately bounded on the north and east by Cobbs Creek, and on the south by Market Street. The creek is graced by an historic mill dam and a bridge said to be eligible for placement on national historic registries. Across Cobbs Creek to the north lies an extension of Fairmount Park and the Cobbs Creek Golf Course. Against all odds, snowy egrets have been seen in this very urban creek environment. In the 1990s what was apparently a pet cougar got loose in the park. Despite police efforts to catch it (and the neighborhood's efforts to keep it well fed with Big Macs) the cougar was last seen loping west on the median strip of West Chester Pike—free.

Cobbs Creek originally hosted the Millbourne Mills, a flour mill, and slightly further south in Upper Darby the first mill in the country, established by Ben Franklin at the corner of 63rd Street and Walnut Street. In the 19th century the Cardington Mill (cotton) was built nearby along Naylor's Run. A paper mill existed around the time of the Civil War somewhat farther north-west on Cobbs Creek, near the current site of the 69th Street Station repair yard. The paper was used to wrap guns for the war.

The borough is the most densely populated municipality in Pennsylvania with 16,557 people living per square mile.

There were 366 households, out of which 33.3% had children under the age of 18 living with them, 42.1% were married couples living together, 9.6% had a female householder with no husband present, and 41.5% were non-families. 34.4% of all households were made up of individuals, and 7.7% had someone living alone who was 65 years of age or older. The average household size was 2.56 and the average family size was 3.43. 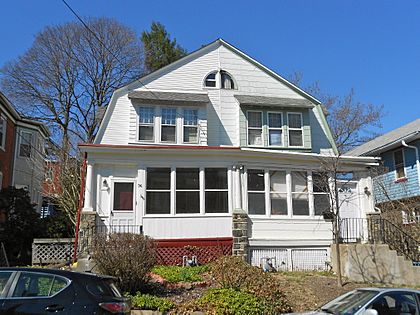 In 2000, 40.2% of Millbourne residents identified themselves as being of Asian Indian heritage. This was the highest percentage of Indian Americans of any place in the United States. Millbourne is also the only community in Pennsylvania, and the only community outside California, New Jersey, and Hawaii with an Asian American majority. Millbourne is home to a gurudwara, where the Philadelphia Sikh Society holds services. There is a mosque about a quarter mile away in Upper Darby, PA. A number of residents originate from Kerala, a south-western state of India and there is a major Keralite arts and culture fair held annually nearby in Upper Darby. The Borough boasts an expert in the ancient art of Cambodian court dance.

Fire protection is provided by the Millbourne Fire Company in partnership with the Upper Darby Fire Department. The Borough also maintains its own police department, which provides frequent coverage of each street. Millbourne has a Town Watch, a volunteer organization run in cooperation with the police department.

The Upper Darby/Sellers Memorial Free Library Municipal Branch is within easy walking distance of Millbourne. A library card from the Upper Darby system allows access to the county-wide libraries, and offers an excellent inter-library loan program as well as many local resources. A myriad of ethnic grocery stores are also within easy walking distance, allowing residents to buy home-made tofu, a wide range of Punjabi and other Indian foods, Halal chicken and lamb, a wide range of Asian greens, Japanese, Chinese, and Korean-made foods, Central American foods, and mainstream American foods within minutes of their homes.

Korean, Mexican, Peruvian, Colombian, Vietnamese, Caribbean, southern rib, Punjabi and an award-winning pizza restaurant (and, until recently, a Filipino-owned restaurant where adobo was served) are all within walking distance.

The Cobbs Creek Bikeway runs from a corner at the eastern end of Millbourne, 63rd and Market Streets, to approximately 86th and Cobbs Creek Parkway. It is used by walkers and bicyclists as well as occasional all terrain vehicles. Plans exist to eventually connect this bikeway to the John Heinz Wildlife Refuge. These plans got a boost from a TIGER grant allowing planning for the 58th Street Connector. There is some support for a rail-with-trail bike path along SEPTA's Route 100 line from Radnor to 69th Street. The adjacent town, Upper Darby, is studying feasibility of a walking path on another old rail right of way, the Newtown Square Branch, which might eventually feed into Millbourne. For bicyclists, it is feasible outside of rush hour to take a bicycle on the Market Frankford Line to reach 30th Street, and bicycle along the Schuylkill River Path to Valley Forge, and the Perkiomen Creek trail to Collegeville or beyond.

The Millbourne Borough Council re-established a paper recycling program in approximately 2009, which was discontinued due to vandalism of the paper bins. County "igloos" for recycling glass are located behind the auto parts store approximately at the corner of Powell Lane and Market Street. The county offers recycling of electronics periodically.

Across Market Street, just inside Upper Darby on the eastern end of town, there's a community garden. There's a bit of a wait for a plot. Farther east of the garden, also in Upper Darby, is the Life Center of Eastern Delaware County. This is a 50-bed homeless shelter for individual adults. Many residents of Millbourne volunteer serving or making food at this facility, which is quiet, well-run and well maintained.

Community clean-ups are held a few times a year on a volunteer basis, often followed by a barbecue or pot-luck.

Health care services are available about a mile away at the ChesPenn Family Health Center of Upper Darby, whether or not a patient has health insurance, and hospitals abound in the Philadelphia area easily accessible by car or the Market Frankford El. Delaware County Memorial Hospital (accessible by car or by the Route 101 or 102 trolleys) is a few miles away.

After decades of Republican majority, the Borough has recently become majority Democratic in terms of registration. As of January 4, 2010 the Borough leadership is bi-partisan, consisting of 4 Democrats and 1 Independent on Council, and a Republican Mayor.

Millbourne was the home of the Millbourne Mills, a grain mill originally established in the 18th century by the Sellers family, and closed in 1927. The old mill dam is still visible on the creek today, as is an arch that covered a rail line serving the Mill.

Later, a Sears department store was located on a plot of land at the north eastern end of Millbourne on what is commonly thought to be a flood plain for Cobbs Creek. The Sears department store, through mercantile tax, provided approximately half of the Borough's revenues. It was relocated to the corner of Walnut Street and 69th Street in Upper Darby in 1992. This relocation has caused significant financial difficulties for the Borough, which now has one of the top two tax rates in Delaware County.

Millbourne was designated a financially distressed municipality in 1993 by the state of Pennsylvania. The Borough requested removal from distressed status in approximately 2006, but has since applied for status as a "blighted" community. A blight certification request was completed by the Delaware County Planning Department in 2006.

All content from Kiddle encyclopedia articles (including the article images and facts) can be freely used under Attribution-ShareAlike license, unless stated otherwise. Cite this article:
Millbourne, Pennsylvania Facts for Kids. Kiddle Encyclopedia.