Kids Encyclopedia Facts
This page is about the current route. For the PA Route 3 in the 1920s, see William Penn Highway.

Pennsylvania Route 3 (PA 3) is a 24.3-mile (39.1 km) state highway located in the southeastern portion of Pennsylvania. The route connects U.S. Route 322 Business (US 322 Bus.) in West Chester with PA 611 in Philadelphia. The route begins in downtown West Chester and heads east out of town as a one-way pair of streets. Between West Chester and Upper Darby, PA 3 follows a four-lane divided highway named West Chester Pike through suburban areas. Along this stretch, the route passes through Edgmont, Newtown Square, Broomall, and Havertown. The route has an interchange with Interstate 476 (I-476) between Broomall and Havertown. Upon reaching Upper Darby, PA 3 heads into Philadelphia along Market Street. In Philadelphia, the route follows multiple one-way pairs, running along Chestnut Street eastbound and Walnut Street westbound in West Philadelphia before heading into Center City Philadelphia along Market Street eastbound and John F. Kennedy Boulevard westbound and ending at Philadelphia City Hall. 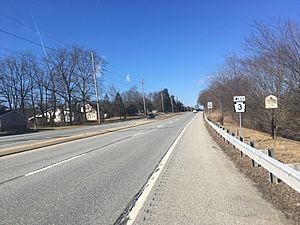 PA 3 begins at an intersection with US 322 Bus. (High Street) in the downtown area of the borough of West Chester in Chester County near the historic Chester County Courthouse. From here, the route heads northeast on the one-way pair of East Market Street eastbound and East Chestnut Street westbound. The one-way streets carry two lanes in each direction as they pass downtown businesses. At the intersection with Matlack Street, the westbound direction of PA 3 shifts from East Chestnut Street to East Gay Street. The route continues to follow East Market Street eastbound and East Gay Street westbound through commercial areas, passing north of the terminus of the West Chester Railroad at the West Chester station along East Market Street. PA 3 leaves West Chester for West Goshen Township and intersects Westtown Road before it comes to an eastbound exit and westbound entrance with Paoli Pike. At this point, both directions of the route come together and head east along four-lane divided West Chester Pike, passing through residential areas in the community of Chatwood. PA 3 comes to an interchange with the US 202/US 322 freeway and runs past businesses and some homes. The road curves east-southeast at the Strasburg Road intersection and crosses into East Goshen Township, where it continues past suburban neighborhoods and commercial establishments, passing through the community of Goshen. PA 3 enters Westtown Township and reaches an intersection with PA 352, forming a short concurrency before PA 352 splits to the southeast. The road heads east through wooded areas with residential subdivisions as it continues into Willistown Township. The route intersects the eastern terminus of PA 926 and curves east-northeast through a mix of fields and woodland with some homes, crossing the Ridley Creek. 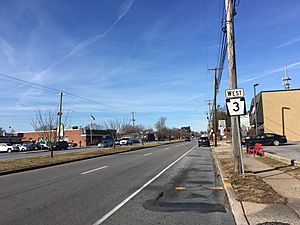 PA 3 westbound past PA 320 in Broomall

PA 3 enters Edgmont Township in Delaware County as it passes to the north of Ridley Creek State Park. The road continues east with some homes and businesses, crossing Providence Road. After passing to the south of a shopping center, the route crosses Crum Creek into Newtown Township and heads south of the Delaware County Veterans Memorial, running past a mix of fields and development. PA 3 curves east at the Boot Road intersection and passes between a business campus to the north and a residential neighborhood to the south. The road heads into business areas and reaches an intersection with PA 252 in the community of Newtown Square. Following the PA 252 intersection the route continues east through a mix of suburban residential and commercial areas. At the Media Line Road junction, PA 3 crosses into Marple Township and soon intersects Springfield Road. The road passes more homes and businesses and comes to a junction with PA 320 in the community of Broomall. The route continues near suburban neighborhoods with some businesses before it comes to an interchange with I-476. 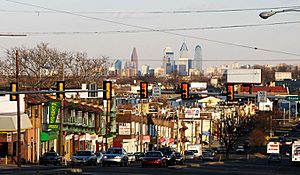 PA 3 eastbound in Upper Darby, with the Philadelphia skyline in the background

Past the I-476 interchange, PA 3 intersects Lawrence Road and crosses the Darby Creek into Haverford Township. The road continues east past homes and businesses as it passes through the community of Havertown, crossing Eagle Road. Farther east, the route crosses Naylors Run and heads into the community of Llanerch, where it intersects Darby Road a short distance before coming to a junction with US 1. After crossing US 1, PA 3 enters Upper Darby Township and continues past suburban businesses and homes. The road crosses State Road and heads into more urban areas of residential and commercial development. A set of SEPTA trolley tracks begins running in the median before the route comes to Terminal Square, where it crosses SEPTA's Route 101 and 102 trolley lines at-grade. Past this, PA 3 heads east on four-lane undivided Market Street as it passes between SEPTA's 69th Street Transportation Center to the north and urban businesses to the south, gaining a median before the 69th Street intersection. The route becomes undivided again and passes more commercial development, forming the border between the borough of Millbourne to the north and Upper Darby Township to the south. PA 3 heads past some homes before becoming a divided highway at the eastern edge of Millbourne as SEPTA's Market–Frankford Line rises to pass over the road.

PA 3 crosses the Cobbs Creek into the city of Philadelphia in Philadelphia County, where it immediately splits from Market Street by turning south onto Cobbs Creek Parkway at the 63rd Street station on the Market–Frankford Line. The route follows four-lane undivided Cobbs Creek Parkway between woods along the creek to the west and urban development to the east before it splits east onto a one-way pair. The eastbound direction of PA 3 follows Chestnut Street while the westbound direction of PA 3 follows Walnut Street a block to the south. Chestnut Street carries three lanes of one-way eastbound traffic while Walnut Street carries two lanes of one-way westbound traffic. PA 3 follows Chestnut and Walnut street east through residential areas of West Philadelphia, passing several blocks of rowhomes with some businesses. Walnut Street passes to the north of William L. Sayre High School between 59th and 58th streets while Chestnut Street passes south of West Philadelphia High School before crossing 49th Street, south of the Community College of Philadelphia's West Regional Center past 48th Street, and south of West Catholic Preparatory High School prior to crossing 45th Street. Farther east, the route reaches the University City neighborhood of Philadelphia, where Walnut Street runs along the edge of the University of Pennsylvania campus. The streets cross a SEPTA trolley track at 40th Street. Upon reaching US 13, westbound PA 3 shifts from Walnut Street to Market Street, running concurrent with US 13 southbound on four-lane divided 38th Street between Market and Walnut streets; 38th Street carries a SEPTA trolley track in the northbound direction. East of US 13, westbound PA 3 follows on Market Street, a three-lane road with a center left-turn lane. At this point, SEPTA's Market–Frankford Line runs underneath Market Street, with SEPTA's Subway–Surface Trolley Lines joining at 36th Street. Eastbound PA 3 continues east on one-way Chestnut Street. The route passes several multistory commercial buildings as it runs through the northern part of the Drexel University campus. At 33rd Street, eastbound PA 3 turns north and joins the westbound direction on Market Street, continuing east. 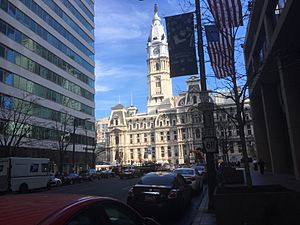 Upon reaching 32nd Street, PA 3 splits into another one-way pair, with eastbound PA 3 continuing east along Market Street and westbound PA 3 following four-lane John F. Kennedy Boulevard, both being two-way streets. The route passes under CSX's Harrisburg Subdivision before coming to the 30th Street intersection at 30th Street Station, which serves Amtrak's Northeast Corridor, the SEPTA Regional Rail system, and NJ Transit's Atlantic City Line. The eastbound direction passes to the south of the station as a four-lane undivided street. The westbound direction bends north around the station, running along a one-way street with two lanes of traffic that heads north on Schuykill Avenue and crosses under the SEPTA tracks before turning west on Arch Street. It then passes to the south of the Cira Centre and curves south as 30th Street under the SEPTA tracks again before turning west on John F. Kennedy Boulevard. Immediately east of 30th Street Station, PA 3 has an interchange with I-76 (Schuylkill Expressway) before it crosses over the Schuylkill River and then the Schuylkill River Trail and CSX's Philadelphia Subdivision on the river's east bank on the Market Street Bridge eastbound and the John F. Kennedy Boulevard Bridge westbound.

At this point, PA 3 heads into Center City Philadelphia on four-lane undivided Market Street eastbound and four-lane divided John F. Kennedy Boulevard westbound. The streets pass several downtown skyscrapers, with the westbound direction running south of SEPTA's Main Line tracks, which head into the Center City Commuter Connection tunnel at 20th Street. At the 20th Street intersection, both directions of PA 3 become one-way streets, with Market Street carrying four lanes of eastbound traffic and John F. Kennedy Boulevard carrying four lanes of westbound traffic as it heads into the Penn Center business district. Eastbound PA 3 passes to the north of Liberty Place between 17th and 16th streets while westbound PA 3 passes to the south of the Comcast Center between 18th and 17th streets, Suburban Station of SEPTA Regional Rail between 17th and 16th streets, and LOVE Park between 16th and 15th streets. PA 3 reaches its eastern terminus at PA 611 (which runs north-south along Broad Street through Philadelphia) at 15th Street, which forms the western part of Penn Square around Philadelphia City Hall. 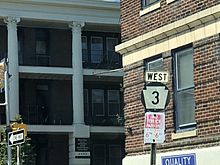 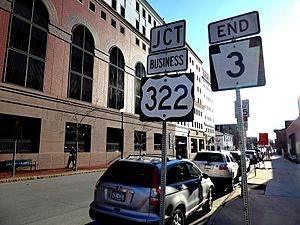 PA 3 western terminus at US 322 Bus. in West Chester

The West Chester Pike was designated as Legislative Route 133 when the Sproul Road Bill was passed in 1911. In 1927, the West Chester Pike and Market Street in Philadelphia were designated as part of PA 5, which ran along the Lakes-to-Sea Highway. Between downtown West Chester and Paoli Pike, PA 5 had a concurrency with US 122/PA 52 (later US 202) along Gay Street. In 1937, PA 3 was commissioned between US 202/US 322/PA 100 (now US 322 Bus.) in West Chester and US 30 in Philadelphia, replacing the previous PA 5 designation. In Philadelphia, PA 3 was shifted by 1940 to follow Chestnut and Walnut streets east before turning north on 5th and 6th streets to meet US 30 at the approach to the Benjamin Franklin Bridge over the Delaware River. 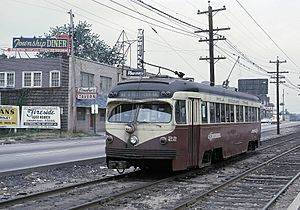 In 1954, regular trolley service between Philadelphia and West Chester ended as plans were made to widen PA 3. Trolley service during peak periods continued until 1958. The trolley service was replaced by buses, which is today part of SEPTA's Route 104 service. During the mid 1950s and early 1960s, the West Chester Pike portion of PA 3 was widened into a four-lane road. US 202 and PA 3 were routed onto a one-way pair in West Chester along Market and Gay streets by 1959. By 1960, PA 3 was rerouted to follow Cobbs Creek Parkway and Baltimore Avenue to end at US 13 at the intersection of Baltimore and Whitby avenues in Southwest Philadelphia. The route was realigned to follow Chestnut and Walnut streets to US 13 at 44th and 43rd streets by 1970. Also by this time, the US 202 concurrency in West Chester was removed as that highway was rerouted to bypass the borough to the east along US 322. PA 3 was extended east to PA 291 and PA 611 at Philadelphia City Hall during the 1970s. The route followed Chestnut and Walnut streets to US 13 at 38th Street before running along Chestnut Street eastbound and Market Street westbound to 30th Street Station, where it shifted to Market Street eastbound and John F. Kennedy Boulevard westbound.

All content from Kiddle encyclopedia articles (including the article images and facts) can be freely used under Attribution-ShareAlike license, unless stated otherwise. Cite this article:
Pennsylvania Route 3 Facts for Kids. Kiddle Encyclopedia.