Swarthmore ( SWORTH-mor SWAHTH-mor) is a borough in Delaware County, Pennsylvania, United States. Swarthmore was originally named "Westdale" in honor of noted painter Benjamin West, who was one of the early residents of the town. The name was changed to "Swarthmore" after the establishment of Swarthmore College. The borough population was 6,194 as of the 2010 census.

The borough was originally part of Springfield Township, and grew up around Swarthmore College, which was founded in 1864. The advent of passenger rail service from Philadelphia in the 1880s greatly enhanced the desirability of the borough as a commuter suburb, and the borough was incorporated in 1893.

The Ogden House and Benjamin West Birthplace are listed on the National Register of Historic Places.

According to the United States Census Bureau, Swarthmore borough has a total area of 1.40 square miles (3.63 km2), all of it land.

There were 1,963 households, out of which 34.1% had children under the age of 18 living with them, 57.3% were married couples living together, 7.8% had a female householder with no husband present, 2.4% had a male householder with no wife present, and 32.4% were non-families. 27.6% of all households were made up of individuals, and 12.5% had someone living alone who was 65 years of age or older. The average household size was 2.48 and the average family size was 3.06. 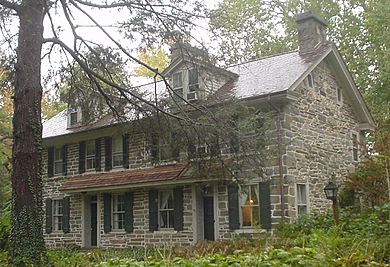 Scott Arboretum is located on the campus of Swarthmore College.

The Swarthmore Public Library is at 121 Park Avenue in the center of the borough.

Swarthmore Station, a SEPTA Regional Rail train station on the Media/Elwyn Line, sits between the college and the town's center.

The borough's only private school is the George Crothers Memorial School, housed in the old Rutgers Avenue School. Notre Dame de Lourdes Catholic School is located adjacent to the borough.

For higher education, the borough is home to Swarthmore College, an academically-acclaimed private liberal arts college.

All content from Kiddle encyclopedia articles (including the article images and facts) can be freely used under Attribution-ShareAlike license, unless stated otherwise. Cite this article:
Swarthmore, Pennsylvania Facts for Kids. Kiddle Encyclopedia.