Springfield Township, or simply Springfield, is a township in Delaware County in the U.S. state of Pennsylvania. The population was 24,211 at the 2010 census. Springfield is a suburb of Philadelphia, located about 10 miles (16 km) west of the city.

First settled by Quakers who arrived in Pennsylvania with William Penn, Springfield was first recognized as a governmental entity in 1686. Many of the streets in Springfield are named after former prominent citizens, including Powell, Kennerly, Lownes, Thomas, Beatty, Lewis, Foulke, Evans, Powell, Pancoast, Worrell, and Edge. Originally, Springfield was primarily a farming town.

On December 9, 1687, the settlers began laying the road to Amosland as it was then called. This road is now known as Springfield Road. In 1701 construction began on the Baltimore Pike; the road was formed of sturdy oak planks, some of which still exist under the current Baltimore Pike. 1701 also marked the year that construction began on the first Quaker meeting house. The meeting house burned in 1737 and was rebuilt. The current meeting house that stands in its spot was constructed in 1851.

By the date of the signing of the Declaration of Independence in 1776 it is estimated from tax records that about 300 people resided in Springfield.

At the beginning of the 20th century Springfield's Baltimore Pike had become one of the busiest commercial areas outside of Philadelphia. The long, straight stretch of Baltimore Pike in the township was referred to "The Golden Mile", commonly known for its many automobile dealerships. The Golden Mile is a unique corridor that is essentially a compact commercial strip that cuts directly through bedroom communities on both sides. Residents are currently attempting to undo the emblematic effects of urban sprawl along the mile through the implementation of green initiatives, responsible traffic planning, and zoning improvements.

In the past century, all of Springfield's farmland was slowly bought up by developers who turned Springfield into the town it is today, that is, largely comprising developments of standard suburban single-family homes. One of the largest single developments was the Stoney Creek development. Construction began in 1949 and was completed in only five years. The huge development stretched from West Avenue to Providence Road and ran all the way up to Baltimore Pike. Over 75 homes were constructed in the development. Unlike most housing developments of their time, no two houses in Stoney Creek were built exactly the same. While all resemble each other with their stone fronts and common size, slight variations such as porches and window placement differed on each house, making each one slightly different.

Though all of the farmland of Springfield's past is gone, many of the woods and fields of the past still remain standing today in some of the many parks located throughout the community.

Currently, the bulk of Springfield's history lies recorded in the archives of the Heritage Society of Springfield, and the Springfield Township Public Library (a member of the Delaware County Library System). 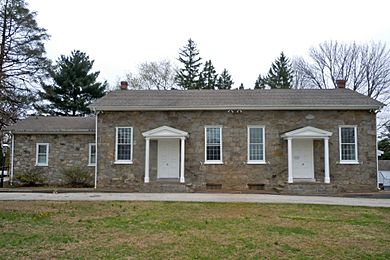 There are 24 parks located in Springfield Township, some of the more notable parks are listed below.

All content from Kiddle encyclopedia articles (including the article images and facts) can be freely used under Attribution-ShareAlike license, unless stated otherwise. Cite this article:
Springfield Township, Delaware County, Pennsylvania Facts for Kids. Kiddle Encyclopedia.