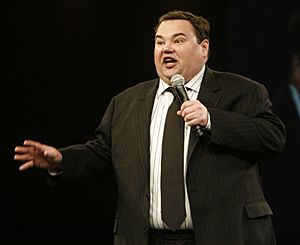 Pinette at the 2010 Leukemia Ball.

Pinette was born in Boston, Massachusetts. He was of French and Irish ancestry.

Pinette was found dead after having a pulmonary embolism on April 5, 2014 in his room at the Sheraton Station Square Hotel in Pittsburgh, Pennsylvania. He was 50 years old.

All content from Kiddle encyclopedia articles (including the article images and facts) can be freely used under Attribution-ShareAlike license, unless stated otherwise. Cite this article:
John Pinette Facts for Kids. Kiddle Encyclopedia.