Kids Encyclopedia Facts
This page is about the city in Delaware County, Pennsylvania. For other uses, see Chester, Pennsylvania (disambiguation).

Chester is a city in Delaware County, Pennsylvania, United States, with a population of 33,972 at the 2010 census. Chester is situated on the Delaware River, between the cities of Philadelphia and Wilmington, Delaware. The current mayor of Chester, Thaddeus Kirkland, was elected on November 3, 2015 and served his first day in office on January 4, 2016.

The first European settlers in the area were Swedes. They called the settlement that became Chester first "Finlandia" (the Latin name for Finland), then "Upland" (see the Swedish province of Uppland and the borough of Upland). They built Fort Mecoponacka in 1641 to defend the settlement. 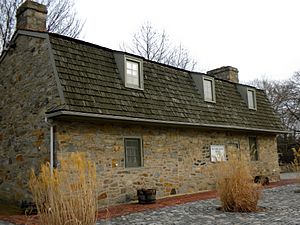 Hendrickson House, built in Chester in 1690 by Swedish farmers, was moved to Wilmington, Delaware, in 1958.

By 1682, Upland was the most populous town of the new Province of Pennsylvania. On October 27, the ship Welcome arrived at the town, bearing William Penn on his first visit to the province. Penn renamed the settlement for the English city of Chester.

Chester's naval shipyard supplied the Union during the Civil War, and the United States in subsequent wars until the shipyard at Philadelphia became dominant after World War II. America's largest postbellum shipyard, John Roach's Delaware River Iron Ship Building and Engine Works, was also located in Chester, and the location was repurposed by the Ford Motor Company with the Chester Assembly factory until 1961. The Sun Shipbuilding & Drydock Co., later Pennsylvania Shipyard & Dry Dock Company, was located in Chester until it closed in 1990. Two ships of the United States Navy have been named USS Chester in honor of the city.

On April 10, 1917, an explosion at the Eddystone Ammunition Corporation near Chester resulted in the deaths of 133 workers, mostly women. 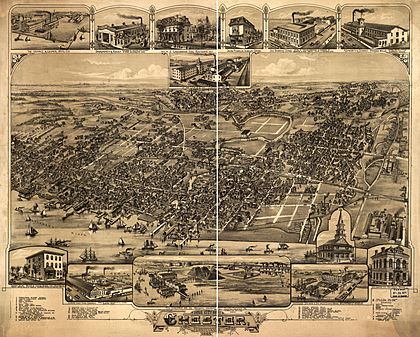 Chester is one of numerous places that claim to be the birthplace of the hoagie sandwich. It is also known as the "Cradle of Rock 'n Roll", as Bill Haley & His Comets first performed and maintained their headquarters in the Chester area.

Chester borders on (clockwise from southwest to northeast) Trainer Borough, Upper Chichester Township, Chester Township, Upland Borough, Parkside Borough, Brookhaven Borough, Nether Providence Township, Ridley Township, and Eddystone Borough in Pennsylvania. Across the Delaware River, the city faces Gloucester County, New Jersey, and while most of its riverfront borders Logan Township, the easternmost portion of the city borders Greenwich Township. The city has a total area of 6.0 square miles (15.6 km2), 4.8 square miles (12.5 km2) of which is land and 1.2 square miles (3.0 km2) of which (19.42%) is water, according to the United States Census Bureau.

Being at a low elevation between Philadelphia and Wilmington, Chester experiences a humid subtropical climate (Cfa) bordering a humid continental climate (Dfa.) The hardiness zone is 7b. 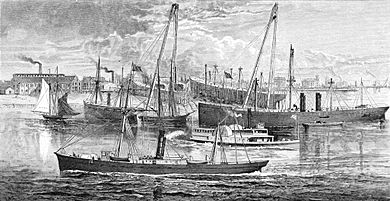 In Chester, east-west streets are numbered, while north-south streets carry names. The main bisecting street, known as The Avenue of the States south of 9th Street and Edgmont Avenue north of it, is signed as both Pennsylvania Route 320 (southbound only; northbound PA Rt. 320 uses adjacent Madison Street to Interstate 95) and Pennsylvania Route 352. North of I-95, State Route 320 follows Providence Avenue. Between 1993 and 2006, the Pennsylvania Department of Transportation (PennDOT) widened and realigned Pennsylvania Route 291 from Trainer to Eddystone from a two-lane roadway to a five-lane roadway. This widening and realignment project, spearheaded by the late State Senator Clarence D. Bell of Upland, allows PA Route 291 to maintain at least two travel lanes in each direct between the refinery towns of Marcus Hook and Trainer and the Philadelphia International Airport, as well as promote the riverfront development in the city. Prior to the realignment, which was done first, the roadway followed 2nd Street to Crosby Street, then bore right onto E. 4th Street, widening to four lanes and becoming the "Industrial Highway" in Eddystone. Post-realignment, the road now follows W. 2nd Street to Concord Avenue, becoming the "Industrial Highway" past Concord Avenue and bypassing the Kimberly-Clark (formerly Scott Paper) processing facility.

Commodore Barry Bridge across the Delaware River at Chester

Chester is served by two interstate highways: Interstate 95 and Interstate 476, which meet in nearby Eddystone. I-95 was built in the 1960s and originally terminated just north of the Chester/Eddystone line at the present-day I-95/I-476 junction. It was extended north in the 1970s, with the section around Philadelphia International Airport being completed in 1985. Three exits on I-95 allow access to Highland Avenue, Kerlin Street, and Edgmont Avenue/Avenue of the States (Rts. 320 & 352), with access to Widener University, via State Rt. 320. Of the three, only Kerlin Street is a partial exit, although the Avenue of the States exit was also a partial exit until the completion of a southbound on-ramp, spearheaded by the late State Sen. Bell, was completed in 2002. I-476, planned as an alternative route to State Rt. 320 since the 1920s and an original planned extension of the Pennsylvania Turnpike in the 1950s (as part of the 1,000-mile (1,600 km) Turnpike network), was finally opened to traffic in 1992. An exit in Ridley Township at MacDade Boulevard (which becomes 22nd Street in Chester) allows access to I-476 without having to use I-95.

US 322 enters Chester as a part of I-95 (merging on at Highland Avenue) and then departs I-95 at the Commodore Barry Bridge exit. Prior to the bridge's opening in 1974, US 322 would cross the Delaware River on the Chester-Bridgeport Ferry, via Flower Street, causing major backups because of limited space on the ferries. With the expansion of State Rt. 291 and the redevelopment of the Chester Waterfront, both the Delaware River Port Authority and PennDOT built a pair of entrance (westbound) and exit (eastbound) ramps to PA Rt. 291, providing direct access to the waterfront without using local streets.

Talks have taken place for the reconstruction of US 322 from a two-lane road to a four-lane road between Chester and U.S. 1 in Concordville, and the Highland Avenue exit. The road currently requires traffic to merge onto I-95 in the left lane and requires changing lanes three times to the Commodore Barry Bridge exit ramp in less than a mile. Such a major undertaking would result in the demolition of numerous homes in the city's crime-plagued Highland Gardens section, along with condemning properties in nearby Chester Township, as I-95 passes through both municipalities between US 322 and the Commodore Barry Bridge.

A $16.6 million project to fix up eight I-95 bridges will begin March 2017 and is expected to be finished in November 2018. Improvements to Chestnut Street and Morton Avenue are also included in the project. 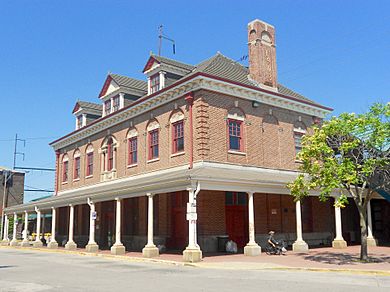 Public transportation in Chester is provided by the Southeastern Pennsylvania Transportation Authority (SEPTA), which acquired the former Suburban Philadelphia Transit Authority (aka "Red Arrow" Lines) in 1968. Seven bus routes (Routes 37, 109, 113, 114, 117, 118, and 119) serve the city, with the Chester Transportation Center in the city's business district, serving as the hub. Route 37 connects Chester with Philadelphia and the Philadelphia International Airport, while Route 113 from 69th Street Terminal connects Chester with the state of Delaware. Both Routes 37 and 113 provide direct service to the Harrah's Philadelphia Racetrack and Casino located within the city, with Route 113 also providing service to the Philadelphia Union's Talen Energy Stadium soccer-specific stadium on the city's waterfront.

The city is also served by SEPTA's Wilmington/Newark Line commuter rail service, via Amtrak's Northeast Corridor. The Chester Transportation Center, serves as the main bus hub and the main train station in the city, while the Highland Avenue station, located approximately 4 miles (6 km) southwest of Chester T.C. station, is also served by Wilmington/Newark trains. A third station, at Lamokin Street, located approximately a mile east of the Commodore Barry Bridge at the junction of the NEC and the abandoned Penn Central Chester Creek Secondary Branch, was operated by SEPTA as a flagstop station until it was closed and demolished in 2003 due to low usage.

Historically, the Chester Transportation Center was, like the Paoli station on the Paoli/Thorndale Line, both a commuter and intercity stop on the former Pennsylvania Railroad's New York–Washington route. But when Amtrak took over intercity rail passenger services in 1971, the Chester Transportation Center was bypassed, except from April 30, 1978, to October 29, 1983, when the Chesapeake stopped once daily in each direction between Philadelphia and Washington.

All content from Kiddle encyclopedia articles (including the article images and facts) can be freely used under Attribution-ShareAlike license, unless stated otherwise. Cite this article:
Chester, Pennsylvania Facts for Kids. Kiddle Encyclopedia.