Exton is a census-designated place (CDP) in West Whiteland Township, Chester County, Pennsylvania, United States. Its population was 5,622 at the 2020 census. The Exton Square Mall and Main Street at Exton are both located within Exton along with several other shopping centers, making Exton the major shopping district in Chester County.

Exton lies at the intersection of U.S. Route 30 (formerly the Lancaster Road, and later the Lincoln Highway) and Pennsylvania Route 100 (Pottstown Pike). Beginning in the late 18th century, the Lancaster Road became a major transportation route between Philadelphia and the west, while what is now Route 100 was a regional north-south route to Pottstown. A theory exists that Exton was named as the "X" on the map, denoting this intersection, though more likely the village was named after one of the several Extons in the United Kingdom.

In the late 1940s, Exton became home to the Newcomen Society of the United States. The campus of the learned society was built overlooking farmland on Newcomen Road, and featured offices, a printing shop, library and museum, guest houses, a chapel and a belltower with a carillon. The Newcomen Society (since dissolved) sold the property in the late 1990s, but its campus remains an Exton landmark serving as the headquarters of another business.

According to the United States Census Bureau, the CDP has a total area of 3.2 square miles (8.3 km2), all of it land.

There were 2,053 households, out of which 20.9% had children under the age of 18 living with them, 45.4% were married couples living together, 5.8% had a female householder with no husband present, and 46.6% were non-families. Of all households 37.5% were made up of individuals, and 7.9% had someone living alone who was 65 years of age or older. The average household size was 2.05 and the average family size was 2.75.

According to the Köppen Climate Classification system, Exton has a humid subtropical climate, abbreviated "Cfa" on climate maps. 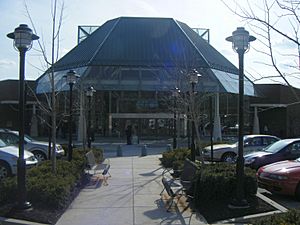 Exton currently has an unemployment rate of 3.80% with a job growth rate of 1.44%. The future job growth is predicted to be 39.10% over the next ten years. The opening of the Exton Square Mall led to rapid growth in West Whiteland Township, with the population increasing from 7,900 in 1973 to over 16,000 by 2000. Since the opening, many shopping centers and office parks have been built in the township. Following the opening of the mall, the West Whiteland Township Police Department was created to patrol the township as the demand from the mall would be too much for the Pennsylvania State Police to handle. When the Exton Square Mall first opened, several stores in downtown West Chester closed. In 2011, the Exton Square Mall saw sales per square foot of $332.

West Pharmaceutical Services, a designer and manufacturer of injectable pharmaceutical packaging and delivery systems is based in Exton.

All residents of the Exton census-designated place, entirely in West Whiteland Township, reside in the West Chester Area School District.

Other schools in the Exton area are the Catholic parish school Saints Philip and James of the Roman Catholic Archdiocese of Philadelphia, and the Church Farm School, which are near but not in the CDP.

Troy University has a learning site in Exton. Exton is home to the offices of 21st Century Cyber Charter School, a statewide cyber school that is known for being the only cyber school to make Pennsylvania's AYP (Adequate Yearly Progress) benchmark 5 years in a row.

Both Widener University and the Delaware County Community College operate in Exton in the Whiteland Business Park. 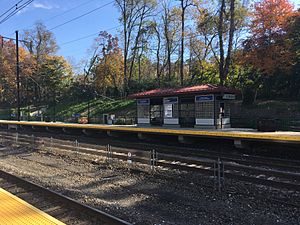 Exton is generally well served by a network of highways. The location is at the confluence of U.S. Route 202, U.S. Route 30, and PA 100, connecting traffic from Philadelphia, Lancaster, and Wilmington.

Exton is well served by the SEPTA Regional Rail at the Whitford and Exton train stations and the Exton Transportation Center located inside the Exton Square Mall complex.

The Exton Transportation Center is a SEPTA bus terminal located on the eastern side of the Exton Square Mall. The station serves as a hub for transfers between SEPTA Routes 135 and 204 with service to West Chester, Coatesville, Paoli and Eagleview.

Rail service at Exton station is provided by Amtrak's Keystone Service and Pennsylvanian lines, as well as SEPTA's Paoli/Thorndale Line. The station is located close to the former Whiteland station served by the former Pennsylvania Railroad.

All content from Kiddle encyclopedia articles (including the article images and facts) can be freely used under Attribution-ShareAlike license, unless stated otherwise. Cite this article:
Exton, Pennsylvania Facts for Kids. Kiddle Encyclopedia.