Coatesville developed in the early 20th century with the growth of the Lukens Steel Company and other industry. Its population declined after industrial restructuring, which reduced these jobs. Lukens was bought by the Bethlehem Steel Corporation in 1997. In 2002, Bethlehem was bought by the then Ohio-based International Steel Group (ISG). Later, Mittal Steel bought ISG and merged with Arcelor Steel to form the ArcelorMittal company.

Varying cultures of Native Americans lived in this area. The first known settlement in the area which would be known as Coatesville was a historic Lenape village built along the West Branch of the Brandywine River. This settlement was a post for fur trading with the earliest American settlers. The Brandywine River has featured prominently in the history of Coatesville.

William Fleming, originally from Scotland, is one of the earliest landowners on record. He built a log cabin in the area of Harmony Street and 5th Avenue and owned about 207 acres (0.84 km2) of land bordering the Brandywine River.

Moses Coates, a prosperous farmer and the namesake of Coatesville, bought the cabin from Fleming's son in 1787. With the economy rising in the years after the United States gained independence, Moses Coates' son-in-law, Jesse Kersey, came up with a plan to develop the area by selling frontage on the recently completed Lancaster Turnpike which crossed through their land. The Lancaster Turnpike was the first toll road in the U.S., authorized in 1792 and completed in 1795. A tollgate was located within the present-day Coatesville city limits. Because Coatesville was located roughly halfway between Philadelphia and Lancaster on the turnpike, it became a popular stopping place.

Pierre Bizallion, a French fur trader, settled in the area in the early 18th century. He was said to serve as an interpreter between William Penn and Native American peoples. The Veterans Administration Hospital now occupies a large piece of the roughly 500 acres (2.0 km2) of land that was once owned by Bizallion.

Before Coatesville became a city, the only one in Chester County, it was called Bridge-Town, after the two bridges crossing the Brandywine River. A village named "Midway", named after its station owned by the Philadelphia and Columbia Railroad midway between Philadelphia and Lancaster, was formed in 1834 on the western bank of the Brandywine. The village of Midway and the village of Bridge-Town merged in 1867 to become the borough of Coatesville. Coatesville citizens voted to become a city in 1915.

Coatesville exploited the natural energy of the Brandywine River. Jesse Kersey, Moses Coates' son-in-law, partnered with the ironmaster Isaac Pennock and purchased over 110 acres (0.45 km2) of Moses Coates' farm along both sides of the Brandywine River in 1810. They formed the Brandywine Iron Works and Nail Factory, the forerunner of Lukens Steel. Charles Lukens, MD, married Isaac Pennock's daughter Rebecca in 1813. Following her husband's death in 1825, Rebecca Lukens took over the operations of the mill, purchasing it from her mother. She directed operations through a period of turmoil and market panic, developing it into a prosperous mill. Rebecca Lukens was one of the first women to operate a major corporation in the United States.

As Lukens Steel grew so did Coatesville, eventually becoming known as the "Pittsburgh of the East." By the beginning of the 20th century the population had grown to 6,000, attracting immigrants from Eastern and Southern Europe to its industrial jobs, as well as both black and white migrants from the rural South. Tensions rose in the city as the population rapidly became more diverse.

Pennsylvania passed a state anti-lynching law in 1923. But, even after passage of an anti-lynching House bill in the 1920s, no federal law was passed because of the power of the Democratic southern block in the Senate. It represented only white southerners; African Americans had been disfranchised in the South since the turn of the century.

The school system expanded to keep up and the religious community became more diverse, with Roman Catholic churches founded and Beth Israel Congregation, one of Chester County's few synagogues. In 1932 there were a total of 22 churches of various denominations in the city. After World War II the steel industry began a long decline, but in the 1960s Lukens Steel was still the largest employer in Chester County, with over 10,000 workers. It finally started to restructure due to industry changes, was sold several times, and its workers were reduced in number to 5,000 and eventually to 2,000. 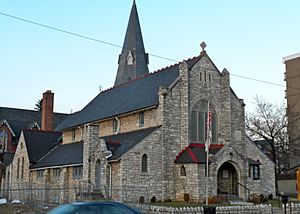 Since the turn of the century, Coatesville has invested in redevelopment, encouraging private projects. It has torn down public housing and encouraged new single family and townhouse developments. A new Marriott Courtyard hotel, built along Route 82 on the outskirts of Coatesville, opened in May 2012. The city has major opportunity to redefine itself as 4 out of 5 of its census tracts are eligible to receive several federal and state economic development grants for economic redevelopment and population health. As of January 2017, city leadership has yet to produce the required action plans to appropriately seize these opportunities. The latest activity involves hedging all economic development on the downtown area only, partnering with Wells Fargo among-st others without an effort to complete a population health plan for the city first, a sure formula for gentrification. A lack of consensus actions has plagued the city throughout the new millennium and is the reason for a cycle of starts and stops, the most popular involving an eminent domain dispute regarding the attempted creation of a city owned golf course. See Coatesville Growing Greater www.coatesvillegrowinggreater.org

The redevelopment plans have generated controversy. The city was involved in a 5-year eminent domain dispute with a local landowner in neighboring Valley Township. It was resolved without the need to seize the property, but displeasure with the events resulted in the city voters turning out four incumbent city councilpersons in the November 2005 general elections. Two of the four new councilpersons are ordained Pentecostal and Methodist ministers, respectively. The city council fired the city solicitor, and accepted the resignation of the city manager (who had negotiated with the Valley Township landowner). The assistant manager, police chief, and city treasurer also resigned.

A series of arsons took place in the city from 2007 to early 2009. A December 2008 fire at a Strode Avenue home resulted in the death of Irene Kempest, an 83-year-old World War II Holocaust survivor. A fire the following month on the 300 block of Fleetwood Street burned 17 row houses, causing $2 million in damage and leaving dozens of people homeless. By March 2009, police had arrested six suspects in the fires. A total of nearly 70 fires occurred during this period. On June 8, 2010 one man, pleading no-contest due to mental illness, was sentenced to a 60-year prison sentence for five of the fires, one of which resulted in Kempest's death. Another man pleaded guilty to the Fleetwood Street fire and eight others, receiving a sentence of 12.5 to 25 years with an order to pay $2.5 million in restitution. Twenty of the nearly 70 fires over the two-year span remain unsolved.

In 1969 Lukens Steel forged steel beams for the World Trade Center to be constructed in New York City. Some of these beams, known as "trees", remained standing after the 9/11 Terrorist Attacks. Ten of the "trees" that remained were transported to Coatesville on April 15, 2010. They are to be used as a part of the proposed National Iron and Steel Heritage Museum.

The main east–west road serving Coatesville is US 30, which bypasses the city to the north on a freeway and provides access to Lancaster to the west and Philadelphia to the east. US 30 Business runs east–west through the heart of the city on Lincoln Highway. PA 82 is the main north–south road in Coatesville, running along Strode Avenue, Lincoln Highway, and North 1st Avenue, and heading north to Elverson and south to Kennett Square. PA 340 passes to the north of the city while PA 372 begins at PA 82 in Coatesville and heads west on Valley Road to Parkesburg and Atglen.

Coatesville is served by the Coatesville Amtrak Station, which serves Keystone Service trains along the Keystone Corridor. Until 1997, the station also served SEPTA's R5 regional rail line from Philadelphia.

All content from Kiddle encyclopedia articles (including the article images and facts) can be freely used under Attribution-ShareAlike license, unless stated otherwise. Cite this article:
Coatesville, Pennsylvania Facts for Kids. Kiddle Encyclopedia.