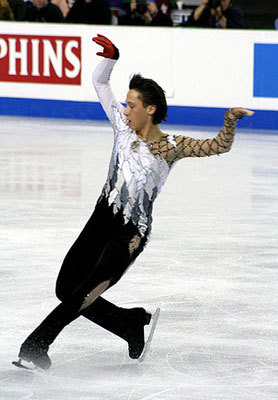 Weir as the Swan.

Johnny Weir (born July 2, 1984 in Coatesville, Pennsylvania) is an American figure skater. He won the United States national championships three times. In a memoir released in January 2011, he wrote that he was gay.

Weir had a late start in skating, starting at the age of 12. He had previously competed as an equestrian.

Weir and his family moved to Delaware so he could skate. Weir originally trained at the University of Delaware. Despite his late start, Weir was the World Junior Champion in 2001 at the age of sixteen. He and Evan Lysacek won the top two medals that year, becoming the first time since 1987 that the US had gone one-and-two at Junior Worlds.

In 2003, Weir was in second place after the short program at the national championships in Dallas. However, he literally hit the wall during the program and then had a bad fall on a jump. He withdrew in the middle of the program. As he left, he got a hug from Lysacek, who told he would see him back the next year.

Following that bad competition, Weir left the University of Delaware club and moved to The Pond ice arena. His coach Priscilla Hill came with him.

In 2004, Weir won the National championships and again in 2005 and 2006. For the 2005/2006 season, Weir had a short program to The Swan. It was mocked during the movie Blades of Glory and became iconic of the 2006 Olympics. Weir had the most success of his career with this short program. At the 2006 Winter Olympics, Weir was second after the short program. After a long program in which he omitted the eighth jumping pass and did two combinations when three were allowed, he dropped to fifth place overall.

In 2007, Weir won the bronze medal at Nationals. After that season he switched coaches to Galina Zmievskaya, who previously coached Viktor Petrenko and Oksana Baiul to Olympic gold medals.

Weir lives and trains in New Jersey. He also works as a model. He has appeared in spreads in fashion magazines and walked the catwalk during New York Fashion Week.

All content from Kiddle encyclopedia articles (including the article images and facts) can be freely used under Attribution-ShareAlike license, unless stated otherwise. Cite this article:
Johnny Weir Facts for Kids. Kiddle Encyclopedia.