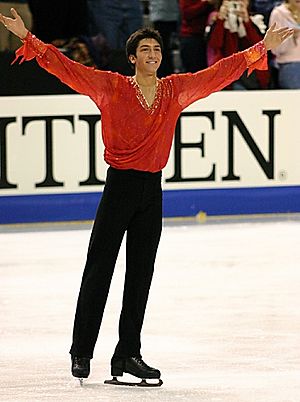 Evan Lysacek (born June 4, 1985) is an American figure skater. He grew up in Chicago, Illinois. Lysacek has trained all over the world, including in Switzerland and in Moscow. He now trains in El Segundo, California under his trainer Frank Carroll. Carroll at one time trained Michelle Kwan.

All content from Kiddle encyclopedia articles (including the article images and facts) can be freely used under Attribution-ShareAlike license, unless stated otherwise. Cite this article:
Evan Lysacek Facts for Kids. Kiddle Encyclopedia.