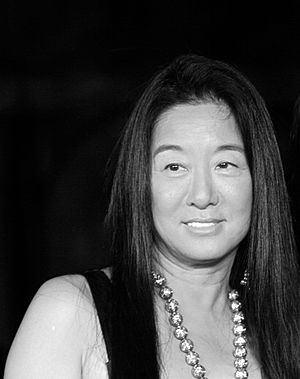 Vera Wang (Chinese: 王薇薇; pinyin: Wáng Wēiwei; born June 27, 1949) is an American fashion designer. She was born and raised in New York City. Her parents were Chinese. She is based in New York and is known for her wedding gown collection, among other specialties.

After her graduation in 1971, Wang began working for Vogue Magazine. In 1972, she was promoted as the senior fashion editor. She left Vogue in 1987, to join Ralph Lauren as the design director for accessories.

Wang established her own label "Vera Wang" in 1990, in New York.

All content from Kiddle encyclopedia articles (including the article images and facts) can be freely used under Attribution-ShareAlike license, unless stated otherwise. Cite this article:
Vera Wang Facts for Kids. Kiddle Encyclopedia.