Ivana Marie "Ivanka" Trump born October 30, 1981) is an American model and businesswoman, who is an adviser to the former President of the United States, Donald Trump. She is the daughter of the former president and his first wife, former model Ivana Trump. She is the first Jewish member of a First Family, having converted after marrying her husband, Jared Kushner.

A fourth generation businessperson who followed in the footsteps of her great-grandmother Elizabeth Christ Trump (who founded the company), grandfather Fred Trump, and father, Trump has been an executive vice president of the family owned The Trump Organization as well as served as a boardroom judge on her father's TV show The Apprentice. She moved to Washington, D.C. in January 2017 after her husband was appointed Senior Advisor to the President.

Starting in late March 2017, she began serving in her father's presidential administration. She assumed this official, unpaid position after ethics concerns were raised about her having access to classified material while not being held to the same restrictions as a federal employee. She was considered part of the president's inner circle even before becoming an official employee in his administration.

Ivana Marie Trump was born in Manhattan, New York City, and is the second child of Czech-American model Ivana Marie (née Zelníčková) and Donald John Trump, who in 2017 became the 45th President of the United States. Her father has German and Scottish ancestry and her mother has Czech and Austrian ancestry. For most of her life, she has been nicknamed "Ivanka," a diminutive form of Ivana. Trump's parents divorced in 1991, when she was ten years old. She has two brothers, Donald Jr. and Eric; a half-sister, Tiffany; and a half-brother, Barron.

Before joining the family business as Executive Vice President of Development & Acquisitions at The Trump Organization in 2005, she briefly worked for Forest City Enterprises. In 2007, she formed a partnership with a diamond vendor, Dynamic Diamond Corp., to create Ivanka Trump Fine Jewelry, a line of diamond and gold jewelry, sold at her first flagship retail store in Manhattan. In November 2011, her retail flagship moved from Madison Avenue to 109 Mercer Street, a larger space in the fashionable Soho district.

In December 2012, members of 100 Women in Hedge Funds elected Ivanka Trump to their board.

In October 2016, though, the company's moved and lists Trump Tower as its flagship boutique and its only dedicated retail shop, with the brand also available at fine-jewelry stores throughout the U.S. and Canada, as well as in Bahrain, Kuwait, Qatar, Saudi Arabia, and the United Arab Emirates.

Trump has her own line of fashion items, including clothes, handbags, shoes, and accessories, which is available in major U.S. department stores. 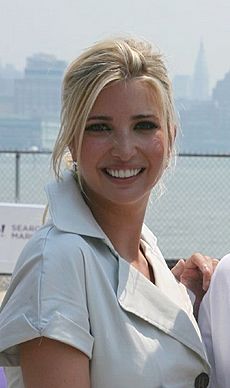 As a teenager attending boarding school, Trump got into modeling "on weekends and holidays and absolutely not during the school year", according to her mother, Ivana Trump. She was featured in advertisements for Tommy Hilfiger and Sasson Jeans, walked fashion runways for Versace, Marc Bouwer and Thierry Mugler. She was featured on the cover of the May 1997 issue of Seventeen which ran a story on "celeb moms & daughters".

After she joined the Trump Organization in an executive position and when she started her jewellery, shoe, and apparel lines, she appeared in advertisements promoting the Trump Organization and her products. She was also featured in women's and special interest publications in "soft-hitting" profiles focusing on her "looks, lifestyles, and product lines", and featuring her on the cover of the same issue, like Harper's Bazaar, Forbes Life, Golf Magazine, Town & Country, and Vogue.

In 2006, Trump filled in for Carolyn Kepcher on five episodes of her father's television program The Apprentice 5, first appearing to help judge the [[The Apprentice (U.S. season 5). 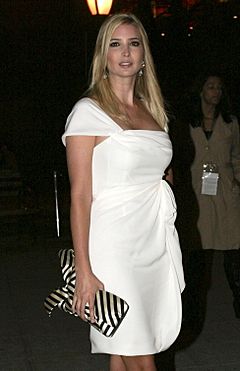 She replaced Kepcher as a primary boardroom judge during the sixth season of The Apprentice and its follow-up iteration, The Celebrity Apprentice.

In 2003, she was featured in Born Rich, a documentary about the experience of growing up as a child in one of the world's most affluent families.

In 2006, she was a featured guest-judge on season 3 of Project Runway. She was also at a Milwaukee, Wisconsin, event in April 2007 called the Creating Wealth Summit in which she spoke for about 30 minutes about making money and her latest projects.

In 2010, Trump and her husband briefly portrayed themselves in Season 4 Episode 6 of Gossip Girl.

In 2015, she appeared as herself in an episode of Saturday Night Live.

In 2015, Trump publicly endorsed her father's presidential campaign. Trump was involved with her father's campaign by making public appearances in support of him and defending him. However, she admitted mixed feelings about his presidential ambitions, saying, in October 2015, "As a citizen, I love what he's doing. As a daughter, it's obviously more complicated." In August 2015, Trump's father stated that she was his leading adviser on "women's health and women" and said it was she who propelled him to elaborate on his views of women. 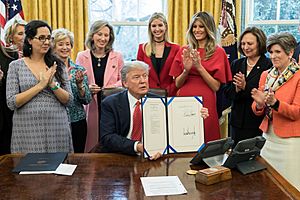 Trump (4th from right) attending the signing ceremony for the INSPIRE Women Act on Tuesday, February 28, 2017, in the Oval Office of the White House

In January 2016, Trump was featured in a radio ad which aired in the early voting states of Iowa and New Hampshire, in which she praised her father. She appeared by his side following the results of early voting states in 2016, in particular briefly speaking in South Carolina after being invited by her father to speak, thanking the state in doing so. She was not able to vote for her father in the New York primary in April 2016 because she missed the October 2015 deadline to change her registration from independent to Republican.

Trump is bilingual, speaking English and French, and has an elementary knowledge of her mother's native Czech language. 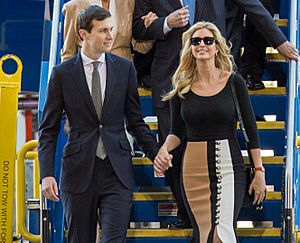 Kushner and Trump in February 2017 at an event in North Charleston, South Carolina

In 2005, she started dating real estate developer Jared Kushner, whom she met through mutual friends. The couple broke up in 2008 due to the objections of Kushner's parents, but the couple got back together and married in a Jewish ceremony on October 25, 2009. They have three children, a daughter and two sons, born in 2011 and later.

Trump has a close relationship with her father, who has publicly expressed his admiration for her on several occasions. Ivanka has likewise praised her father, complimenting his leadership skills and saying he empowers other people.

Ivanka was a childhood friend of Paris Hilton. She is also friends with Chelsea Clinton (daughter of Hillary Clinton, Donald Trump's major opponent in the 2016 U.S. Presidential Election), who says of her: "There's nothing skin-deep about Ivanka. And I think that's a real tribute to her because certainly anyone as gorgeous as she is could have probably gone quite far being skin-deep." Her other friends include Georgina Bloomberg, whose father is Michael Bloomberg (a former New York City Mayor who had also considered entering the presidential race against Trump's father).

All content from Kiddle encyclopedia articles (including the article images and facts) can be freely used under Attribution-ShareAlike license, unless stated otherwise. Cite this article:
Ivanka Trump Facts for Kids. Kiddle Encyclopedia.