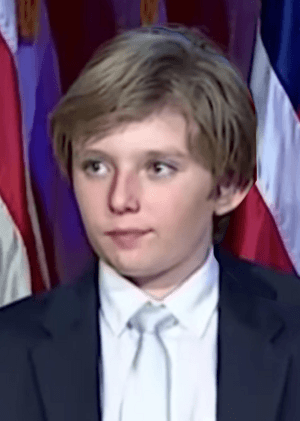 Barron Trump (born March 20, 2006) is the teenage son of former US President Donald Trump. He is Trump´s youngest child, and also he is Donald and Melania Trump´s only child. He has served as First Son since January 20, 2017.

In May 2006, Barron Trump was baptized at the Episcopal Church of Bethesda-by-the-Sea in Palm Beach, Florida. He attended the Columbia Grammar & Preparatory School in Manhattan. Barron is fluent in English and Slovene. During his early childhood, Barron made several television appearances, including on The Apprentice and a May 16, 2006, episode of The Oprah Winfrey Show at only two months old. Barry lived in the Trump Tower before his father became president. Barron did not immediately move into the White House when his father became president, but remained at Trump Tower with his mother until the end of the 2016–2017 school year. Melania and Barron moved to the White House on June 11, 2017. He now attends St. Andrew's Episcopal School in Potomac, Maryland.

Trump was born to Melania and Donald Trump on March 20, 2006. He is Donald´s youngest child, as well as the only child of Donald and Melania Trump.

Barron is noted to be a fan of soccer. He appeared in an Arsenal F.C. jersey and met D.C. United players at the White House Easter Egg Roll in April 2017. In September 2017, he was selected to join the U-12 team for D.C. United's Development Academy for the 2017–2018 season. In December 2018, he met D.C. United player Wayne Rooney and family, who had been invited to the White House Christmas Party. As of February 2019, Trump plays with the Arlington Soccer Association.

All content from Kiddle encyclopedia articles (including the article images and facts) can be freely used under Attribution-ShareAlike license, unless stated otherwise. Cite this article:
Barron Trump Facts for Kids. Kiddle Encyclopedia.