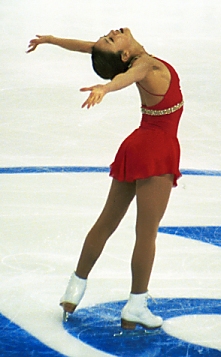 Michelle Kwan was born on July 7, 1980, in Torrance, California. Kwan showed interest in figure stating when she followed Ron and Karen, her brother and sister, onto the ice, saying that all she could remember was "every day, tying up my skates and a big smile on my face, excited to go on the ice". She attended public school until eighth grade, when she began being homeschooled in 1994.

All content from Kiddle encyclopedia articles (including the article images and facts) can be freely used under Attribution-ShareAlike license, unless stated otherwise. Cite this article:
Michelle Kwan Facts for Kids. Kiddle Encyclopedia.