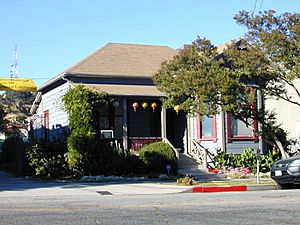 Its mission is as follows:

They purchased the site of their present building in Bernard Street in the mid 1990s, constructing a Chinatown Heritage & Visitors Center, which is open to the public.

In 1992 the society was able to purchase an 1880 shrine surrounded by 42 burial places in Evergreen Cemetery, which they restored. It is now a registered historic monument.

Each year the Chinese Historical Society of Southern California honors Chinese Americans who have made significant contributions to the greater Los Angeles community. They have included:

All content from Kiddle encyclopedia articles (including the article images and facts) can be freely used under Attribution-ShareAlike license, unless stated otherwise. Cite this article:
Chinese Historical Society of Southern California Facts for Kids. Kiddle Encyclopedia.