Chinatown is a neighborhood in Downtown Los Angeles, California that became a commercial center for Chinese and other Asian businesses in Central Los Angeles in 1938. The area includes restaurants, shops and art galleries but also has a residential neighborhood with a low-income, aging population of about 10,000 residents.

The original Chinatown developed in the late 19th century, but it was demolished to make room for Union Station, the city's major ground-transportation center. A separate commercial center, known as "New Chinatown," opened for business in 1938.

There are two schools and a branch library in Chinatown, as well as a city park, a state park and a medical center and hospital. Many motion pictures have been filmed in the area. 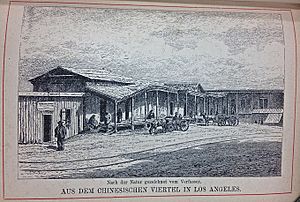 In the early 1860s, thousands of Chinese men, most of them originating from Guangdong province in southern China, were hired by Central Pacific Railroad Co. to work on the western portion of the first transcontinental railroad. Many of them settled in Los Angeles.

In 1871, nineteen Chinese men and boys were killed by a mob of about five hundred white men in one of the most serious incidents of racial violence that has ever occurred in America's West. This incident became known as "Massacre of 1871".

The first Chinatown, centered on Alameda and Macy Streets (now Cesar Chavez Avenue), was established in 1880. Reaching its heyday from 1890 to 1910, Chinatown grew to approximately fifteen streets and alleys containing some two hundred buildings. It boasted a Chinese Opera theater, three temples, a newspaper and a telephone exchange. But laws prohibiting most Chinese from citizenship and property ownership, as well as legislation curtailing immigration, inhibited future growth.

From the early 1910s Chinatown began to decline. Symptoms of a corrupt Los Angeles discolored the public's view of Chinatown; gambling houses, opium dens and a fierce tong warfare severely reduced business in the area. As tenants and lessees rather than outright owners, the residents of Old Chinatown were threatened with impending redevelopment, and as a result the owners neglected upkeep of their buildings. Eventually, the entire area was sold and then resold, as entrepreneurs and developers fought the area. After thirty years of decay, a Supreme Court ruling approved condemnation of the area to allow for construction of a major rail terminal, Union Station. Residents were evicted to make room for Union Station, causing the formation of the New Chinatown.

Seven years passed before an acceptable relocation proposal was put into place, situating a new Chinatown in its present location. Old Chinatown was gradually demolished, leaving many businesses without a place to do business and forcing some to close. Nonetheless, a remnant of Old Chinatown persisted into the early 1950s, situated between Union Station and the Old Plaza. Several businesses and a Buddhist temple lined Ferguson Alley, a narrow one-block street running between the Plaza and Alameda. The most notable of the surviving buildings was the old Lugo house, having been built in 1838 by the prominent Californio family. Some decades later, the Lugo house became the original home of Loyola Marymount University, and later still, it was rented to Chinese-Americans who ran shops on the ground floor and a lodging house upstairs. Christine Sterling, who had brought to fruition the Olvera Street and China City projects (described below), argued that remaining buildings of Old Chinatown were an eyesore and advocated successfully for the razing of all the remaining structures between the Plaza and Union Station. Today the space is occupied by a small park and a parking lot.

"The original Chinatown's only remaining edifice is the two-story Garnier Building, once a residence and meeting place for immigrant Chinese," according to Angels Walk – Union Station/El Pueblo/Little Tokyo/Civic Center guide book. The Chinese American Museum is now situated in Garnier Building.

In the late 1950s the covenants on the use and ownership of property were removed, allowing Chinese Americans to live in other neighborhoods and gain access to new types of employment.

Christine Sterling, who worked tirelessly to bring about the conversion of Olvera alley into the Mexican-themed Olvera Street, conceived of a similar plan for the displaced Chinese American population. In 1938, she opened China City, a walled enclave featuring Chinese-style architecture, restaurants, shops, rickshaw rides, a lotus pond, and a temple. Costumed workers greeted tourists, and a Chinese opera troupe performed live shows in front of the shops. Some replica buildings in China City came from the set of the 1937 Hollywood blockbuster, The Good Earth. China City received mixed support from Chinese American residents and businessmen. Many welcomed the economic opportunity the project provided. Others preferred the New Chinatown project, considered less distorted by the stereotyping lens of Hollywood. During its eleven-year existence, China City was destroyed by fire and rebuilt numerous times. In 1949, an act of arson destroyed China City for the last time; Sterling’s project would not be rebuilt. New Chinatown remains the city’s only downtown Chinatown. 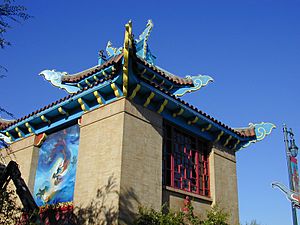 The dragon mural in L.A. Chinatown painted by Tyrus Wong and restored by Fu Ding Cheng (1984) 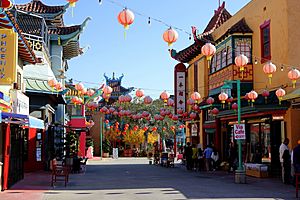 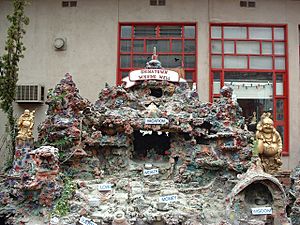 The area that today encompasses New Chinatown was at one time part of Los Angeles' Little Italy. In the early 20th century, Italian immigrants settled in the area north of the Old Plaza. Many built businesses, including wineries (San Antonio Winery is the only one of these still in existence).

In the 1930s, under the efforts of Chinese-American community leader Peter Soo Hoo Sr., the design and operational concepts for a New Chinatown evolved through a collective community process, resulting in a blend of Chinese and American architecture. The Los Angeles Chinatown saw major development, especially as a tourist attraction, throughout the 1930s, with the development of the "Central Plaza," a Hollywoodized version of Shanghai, containing names such as Bamboo Lane, Gin Ling Way and Chung King Road (named after the city of Chongqing in mainland China). Chinatown was designed by Hollywood film set designers, and a "Chinese" movie prop was subsequently donated by film director Cecil B. DeMille to give Chinatown an exotic atmosphere.

The Hop Sing Tong Society is situated in Central Plaza, as are several other Chinatown lodges and guilds. Near Broadway, Central Plaza contains a statue honoring Dr. Sun Yat-sen, the Chinese revolutionary leader who is considered the "founder of modern China". It was erected in the 1960s by the Chinese Consolidated Benevolent Association. A 7-foot tall statue of martial artist Bruce Lee was unveiled at Central Plaza on June 15, 2013. 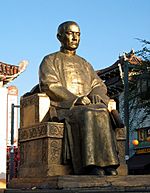 Sculpture of Sun Yat-sen in Chinatown

During the 1980s, many buildings were constructed for new shopping centers and mini-malls, especially along Broadway. Metro Plaza Hotel was opened in the southwest corner of Chinatown in the early 1990s. A large Chinese gateway is found at the intersection of Broadway and Cesar Chavez Avenue, funded by the local Teochew-speaking population.

New Chinatown is served by the Gold Line of the city's Metro Rail; parts of Old Chinatown were uncovered during excavation for another portion of the L.A. subway (the Red Line connection to Union Station). The Metro Rail station in Chinatown has been described as a spectacular pagoda-themed facility and as a cliché of neo-pagoda architecture by Christopher Hawthorne, the Los Angeles Times architecture critic.

By 2000 many people had left the Chinatown for the City of Monterey Park, which has a Chinese community in the San Gabriel Valley. In 2000 AsianWeek said that the Los Angeles Chinatown was "troubled."

On June 28, 2008, a celebration of the 1938 founding of New Chinatown was held with the L.A. Chinatown 70th Anniversary Party. "Though lacking the hustle and bustle of San Francisco's Chinatown, Los Angeles' version has charms of its own."

Chinatown beyond the concentrated business center is flanked by the Elysian Park to the north, Lincoln Heights to the east, Downtown to the south and southwest and Echo Park to the west and northwest.

On the south-easternmost section of Chinatown are the William Mead Homes.

Relation of Chinatown to other places:

According to the 2000 census, Chinatown was the Los Angeles neighborhood with the highest number of residents who were born outside the United States—72.4%. Koreatown and Westlake were next. In Chinatown, China (55.3%) and Mexico (12.4%) were the most common places of foreign birth. 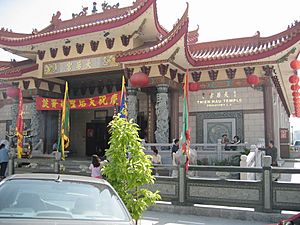 The 2000 U.S. census counted 9,610 residents in the 0.91-square-mile Chinatown neighborhood, excluding the population of the Los Angeles County Jail complex. That made an average of 10,568 people per square mile, which included the empty Cornfield area, and was about average for the city. The median age for residents was 37, considered old when compared to the rest of the city. The percentage of residents aged 65 and older was among the highest for Los Angeles County.

The median household income in 2008 dollars was $22,754, considered low for Los Angeles. The percentage of households earning $20,000 or less (53.6%) was the third-largest in Los Angeles County, preceded by Downtown (57.4%) and University Park (56.6%). The average household size of 2.8 people was just about the city norm. Renters occupied 91% of the housing units, and home- or apartment owners the rest.

The percentages of widowed people were among the county's highest. There were 220 families headed by single parents, or 9.6%, a low figure for Los Angeles.

These were the ten neighborhoods in Los Angeles County with the largest percentage of Asian residents, according to the 2000 census: 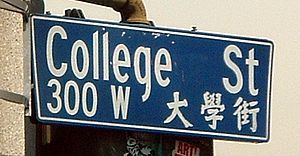 Chinese translation on a street sign at College Street and Broadway. This sign reads in Cantonese Dai hok gai and in Mandarin as Da xue jie (da xue means college or university).

Events that have been held or are planned in Los Angeles's Chinatown include a Chinese New Year Parade, a lantern festival at the Chinese American Museum, a firecracker run and fun walk, a mid-autumn Moon Festival and a Miss Los Angeles Chinatown Pageant. A midnight firecracker display occurs every Chinese New Year's Eve at Thien Hau Temple and Xuan Wu San Buddhist Association.

The conclusion of the film Chinatown was filmed on Spring Street. The movie Rush Hour was filmed on location in Chinatown. It is said that a stroll down Old Chinatown Plaza has many rewards, including recognizing many other locations that are used in filmmaking and television production. 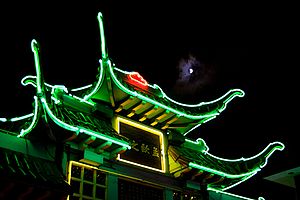 East Gate on Broadway in New Chinatown's Central Plaza, built in 1938, is Historic-Cultural Monument No. 826. West Gate on Hill Street is No. 825.

All content from Kiddle encyclopedia articles (including the article images and facts) can be freely used under Attribution-ShareAlike license, unless stated otherwise. Cite this article:
Chinatown, Los Angeles Facts for Kids. Kiddle Encyclopedia.