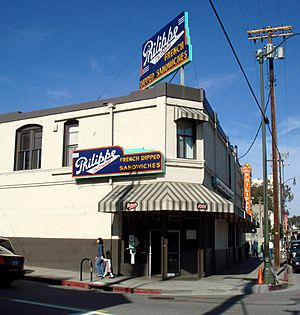 Philippe's is a sit-down restaurant in downtown Los Angeles, California, U.S.A.. It is at 1001 North Alameda Street, near Olvera Street. Phillippe's is famous for inventing the French dip sandwich (though another restaurant called Cole's claims to have invented it, too). It has been in business since 1908, and is the oldest operating restaurant in Los Angeles. The traditional meal served at Phillippe's is a French dip sandwich, a bag of potato chips, a soft-drink (preferably root beer or cola), and a tapioca pudding cup for dessert.

All content from Kiddle encyclopedia articles (including the article images and facts) can be freely used under Attribution-ShareAlike license, unless stated otherwise. Cite this article:
Philippe's Facts for Kids. Kiddle Encyclopedia.