Museum of Chinese in America facts for kids

The Museum of Chinese in America (traditional Chinese: 美國華人博物館; simplified Chinese: 美国华人博物馆; Mandarin Pinyin: Měiguó Huárén Bówùguǎn; Jyutping: Mei5gwok3 Waa4jan4 Bok3mat6gun2; abbreviated MOCA) is a museum in New York City which exhibits Chinese American history. It is a nonprofit 501(c)(3) education and cultural institution that presents the living history, heritage, culture, and diverse experiences of Chinese Americans through exhibitions, educational services and public programs. Much of its collection was damaged or destroyed in a 2020 fire.

Founded in 1980 in Manhattan's Chinatown, the museum began as the New York Chinatown History Project by historian John Kuo Wei Tchen and community resident and activist Charles Lai to promote understanding of the Chinese American experience and to address the concern that "the memories and experiences of aging older generations would perish without oral history, photo documentation, research and collecting efforts."

In 2005, the museum received part of a $20 million grant from the Carnegie Corporation, made possible through a donation by then-New York City mayor Michael Bloomberg.

The museum moved to a new site at 215 Centre Street in 2009. The space was designed by architect Maya Lin and was six times as large as the old site. The permanent exhibition, With a Single Step, was designed by Matter Practice. In May 2011, Herb Tam became curator and director of exhibitions.

In 2019, the museum relaunched their gift store with a new partner, the Asian American retail brand Pearl River Mart. Called MOCA Shop by Pearl River, the store is a "curated collection of items that hold great meaning in Chinese American culture."

In January 2020, a fire damaged the building at 70 Mulberry Street, where the museum's collection was held, with about 85,000 items potentially affected by water damage. While it was initially believed that nearly all of them might have been lost, a substantial part was determined to be "very much salvageable" several days after the incident. Around 35,000 items had been digitized and backed up before the fire. Much of the collection was restored by disaster-relief specialists who worked to prevent mold growth and preserve structure. 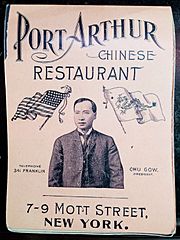 Menu of Port Arthur Chinese Restaurant, one of the oldest Chinese restaurants in Chinatown, on display

The core exhibition With a Single Step: Stories in the Making of America discusses over 160 years of Chinese American history and is augmented annually with two to four rotating exhibitions on thematic, historic, and artistic subjects.

The Museum in January 2015 presented Waves of Identity: 35 Years of Archiving. The title of the exhibit was inspired by a Chinese proverb, “Each wave of the Yangtze River pushes at the wave ahead.”

The Museum's previous gallery space on 70 Mulberry Street is used as an archival center and serves as a research center. The Research Center contains applications, such as Web-based versions of gallery exhibitions and an interactive timeline of Chinese American history. The Center also provides resources on topics such as immigration and diversity. The Research Center was damaged by fire in 2020.

All content from Kiddle encyclopedia articles (including the article images and facts) can be freely used under Attribution-ShareAlike license, unless stated otherwise. Cite this article:
Museum of Chinese in America Facts for Kids. Kiddle Encyclopedia.