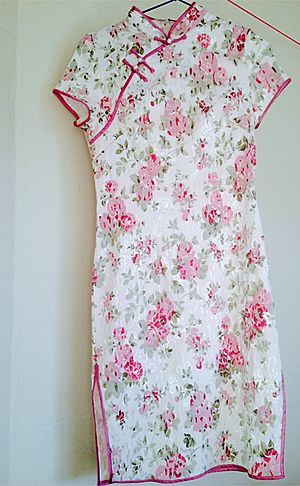 A typical Chinese Cheongsam in short style above the knee

A cheongsam usually has two long slits at either side of the hem for convenient movement and display of the legs. Unlike a short skirt, the slits of cheongsam show a woman's legs when she walks.

The modernized version is noted for accentuating the figures of women, and as such was popular as a dress for high society. As Western fashions changed, the basic cheongsam design changed too, introducing high-necked sleeveless dresses, bell-like sleeves, and the black lace frothing at the hem of a ball gown. By the 1940s, cheongsam came in a wide variety of fabrics with an equal variety of accessories.

The 1949 Communist Revolution curtailed the popularity of the cheongsam and other fashions in Shanghai, but the Shanghainese emigrants and refugees brought the fashion to Hong Kong and Taiwan where it has remained popular. Recently there has been a revival of the Shanghainese cheongsam in Shanghai and elsewhere in Mainland China; the Shanghainese style functions now mostly as a stylish party dress.

In 1929, the Cheongsam was chosen by the Republic of China to be one of the national dresses. In the 1930s, the fashion prevailed in Shanghai.

Traditionally, a Cheongsam is made of silk and embroidered with pearls and other decorations. Cheongsams are close fitting, and draw the outline of the wearer's body.

From the 1950s to the 1970s, due to the anti-tradition movements in China, especially the Chinese Cultural Revolution (1966-1976), the Cheongsam was seen as a feudal dress of the ancient times. It was abandoned as daily clothing, and people who wore Cheongsams were judged as being bourgeois, which was considered a political misbehavior at that time. For example, in 1963, when President Liu Shaoqi visited four neighboring countries in South Asia, first lady Wang Guangmei wore a Cheongsam. She was later declared guilty in the Cultural Revolution for wearing a Cheongsam.

Since 1980s, with the trend of reevaluation of Chinese traditional culture, people in mainland China started to pay attention to the Cheongsam again. The Cheongsam is gaining popularity in films, beauty pageants, and fashion shows in both China and other countries all over the world. In 1984, the Cheongsam was specified as the formal attire of female diplomatic agents by the People's Republic of China. 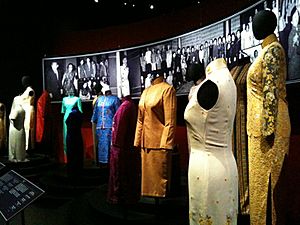 Cheongsam belonging to the wives of past Singaporean political leaders on display in an exhibition entitled In the Mood for Cheongsam: Modernity and Singapore Women at the National Museum of Singapore in 2012

In the 1950s, women in the workforce in Hong Kong started to wear more functional cheongsam made of wool, twill, and other materials. Most were tailor fitted and often came with a matching jacket. The dresses were a fusion of Chinese tradition with modern styles. Cheongsam were commonly replaced by more comfortable clothing such as sweaters, jeans, business suits and skirts. Due to its restrictive nature, it is now mainly worn as formal wear for important occasions. They are sometimes worn by politicians and film artists in Taiwan and Hong Kong. They are shown in some Chinese movies such as in the 1960s film The World of Suzie Wong, where actress Nancy Kwan made the cheongsam briefly fashionable in western culture. However, they are sometimes used as Halloween costumes in some western countries. They are also commonly seen in beauty contests, along with swim suits. Today, cheongsam are only commonly worn day to day as a uniform by people like restaurant hostesses and serving staff at luxury hotels.

Some airlines in Mainland China and Taiwan have cheongsam uniforms for their women flight attendants and ground workers such as China Airlines, China Eastern Airlines, Hainan Airlines, and Xiamen Airlines. They are in a plain color, hemmed just above the knee, with a close fitting wool suit jacket of the same color as the cheongsam. The workers wear stockings and low heeled shoes. Their working places are often air-conditioned so they remain cool.

Many waitresses in Chinese restaurants over the world wear suits and skirts but some wear cheongsam. These cheongsam are long, often foot length or floor length. They have slits high to the waist or hip, and are usually sleeveless or have only cap sleeves. They are often made of brightly colored silk or satin with rich Chinese embroidery. Some nightclub waitresses, ritual girls in ceremonies, and competitors in Chinese beauty competitions wear similar cheongsam uniforms.

All content from Kiddle encyclopedia articles (including the article images and facts) can be freely used under Attribution-ShareAlike license, unless stated otherwise. Cite this article:
Cheongsam Facts for Kids. Kiddle Encyclopedia.