The current Executive Director is Mabel Teng, former member of the San Francisco Board of Supervisors and former City Accessor-Recorder.

The city government put up city-owned land that formerly housed the Hall of Justice for sale. As a compromise, founder J.K. Choy struck a deal with the developer for a 20,000 square foot facility dedicated to community cultural activities. 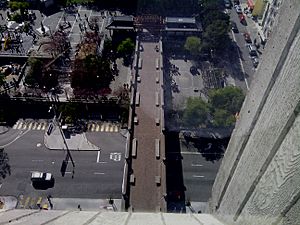 The Chinese Culture Foundation of San Francisco incorporated on October 15, 1965. Another compromise led to the modification of the planned Portsmouth Square Pedestrian Bridge to accommodate the future activities. Holiday Inn was completed in January 1971, while the bridge was completed in August 1971. After some political tensions between CCF and the heavily Nationalist majority faction in Chinatown, work began on the Chinese Culture Center facilities on January 27, 1973.

Early activities were marked by a desire to be non-controversial and non-political because of tense Taiwanese-PRC relations and factions within Chinatown.

Some of the CCC's early art programs were coordinated with local museums, such as the Asian Art Museum of San Francisco.

1989, CCC received a grant to implement an annual program called In Search of Roots. Each year, ten American-born Chinese youth interns who wished to trace their ancestries to the Pearl River Delta, under CCC guidance, researched their family histories, visited their ancestral villages, and contributed findings to an annual CCC exhibit.

Following relaxation of US-PRC relations, CCC began sponsoring public lectures on Chinese arts and culture by scholars. After the Chinese economic reform and democracy in the Republic of China on Taiwan, the Two Chinas became less hostile, so older Chinatown organizations began to cooperate with the Chinese Culture Center in the 1990s.

With the hire of Abby Chen as Program Director in 2008, the Chinese Culture Center began to focus solely on contemporary art, an initiative rebranded as the CCC Visual Arts Center. The Center began publishing catalogues of its exhibitions for sale and archival purposes for archives such as Asia Art Archive.

CCC’s education initiative was dedicated as the Him Mark Lai Learning Center in 2013.

CCC’s public artwork, Sky Bridge, was honored as the "Best Public Art" of 2015 by KQED.

In 2016, the Portsmouth Square Pedestrian Bridge was dedicated as the Rolland Lowe Bridge in honor of the Lowe family's patronage and strong support of CCC.

In the CCC Visual Arts Center, CCC has produced over 100 quarterly, rotating gallery exhibitions of various styles, media, and modalities.

WOMEN我們, a traveling exhibition curated by the CCC's program director Abby Chen that examined feminist, queer, and gender-expansive arts-activism in contemporary China, opened in Shanghai in 2011, came to the CCC Visual Arts Center in 2012, and was exhibited in Miami in 2013.

CCC’s other exhibitions series include Episode, which invites guest curators and artists to expand CCC’s programmatic rhetoric, as well as Present Tense, which gives platform to young, emerging artists.

CCC’s recent initiatives focus on community-based arts in the form of public artworks as well as arts-based interventions. Much of this site-based art is rooted in 41 Ross, CCC's pop-up, collaborative art space that opened in 2013.

CCC’s education initiative was dedicated as the Him Mark Lai Learning Center in 2013, serving as the hub for its tours, both Chinatown Walking Tours and Roots Excursions, as well as lectures, rebranded as Thought Leader Seminars.

Docent-led Chinatown Walking Tours are aimed towards tourists, activists, as well as school groups, locally and nationally. Current tours include:

CCC has also continued to put on festivals for citywide audiences and Chinatown residents, activating Chinatown with political and artistic consciousness by inviting local artists to intervene in local spaces. These include the Chinatown Music Festival in late summer, the Spring Festival in the spring, and Dancing on Waverly in early fall.

All content from Kiddle encyclopedia articles (including the article images and facts) can be freely used under Attribution-ShareAlike license, unless stated otherwise. Cite this article:
Chinese Culture Center Facts for Kids. Kiddle Encyclopedia.