Museum of the African Diaspora facts for kids 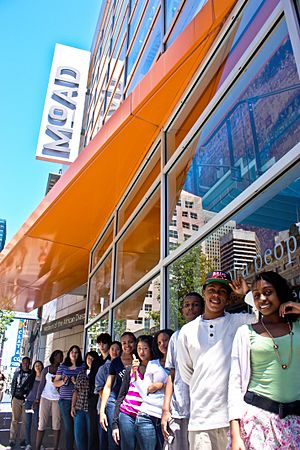 Museum of the African Diaspora members stand outside the museum, awaiting a tour.

The Museum of the African Diaspora (MoAD) is a museum in San Francisco, California, documenting the history, art, and culture of the African diaspora. Their focus spans the migration of Africans across history, from the diaspora at the origin of human existence through the contemporary African Diaspora around the world. It is located at 685 Mission St. next to the St. Regis Museum Tower. The museum, and the building, opened in 2005. With a small staff of 12 (as of 2019), it primarily focuses on presenting the work of other institutions

MoAD was developed as part of a public/private partnership led by the San Francisco Redevelopment Agency. In 1999, the City of San Francisco created a mandate to include an African-American cultural presence in the last vacant parcel of Yerba Buena Gardens. San Francisco Mayor Willie L. Brown appointed a steering committee to determine the mission and scope of a cultural facility within the complex.

The African American Cultural Institute grew out of a research and development process that began in 2002. The new museum was renamed Museum of the African Diaspora to reflect a broadened scope and mission, and incorporated as a 501 (c)(3) nonprofit organization. The space was designed by the Freelon Group within the St. Regis Museum Tower, a 42-story skyscraper that apart from the museum consists of luxury condominiums and a five-star hotel. MoAD opened its doors in 2005.

Linda Harrison was appointed as the Executive Director of MoAD in November 2013. In June 2014, MoAD underwent a six-month renovation that created more gallery space and refreshed the museum's overall look. By October 2014, MoAD was named an official Smithsonian Affiliate. Harrison left MoAD in 2018 to head the Newark Museum in New Jersey.

Before 2014, when the MoAD revised its mission to center on contemporary art, the museum used to introduce visitors to the original African diaspora—the original movement of Homo sapiens (from the earliest human remains found in Africa)—to eventually all inhabited regions. The museum asks visitors "when did you first realize you are African?" The museum espouses the scientifically accepted idea of panethnicity, wherein all humans have a common African origin.

The Emerging Artists Program at the Museum of the African Diaspora was launched concurrently with the celebration of the institution's 10th anniversary, and receives support from the Institute of Museum and Library services.

All content from Kiddle encyclopedia articles (including the article images and facts) can be freely used under Attribution-ShareAlike license, unless stated otherwise. Cite this article:
Museum of the African Diaspora Facts for Kids. Kiddle Encyclopedia.