Homo sapiens (Latin: "wise man") is the scientific name for the human species.

Homo is the human genus. H. sapiens is the only surviving species of the genus Homo.

Modern humans are sometimes called "anatomically modern humans". Homo sapiens considers itself the most influential species on the planet. However, many kinds of life, especially plants and protists, have had a much greater effect on the air, the rocks, life, and natural environment on Earth.

Main page: Out of Africa 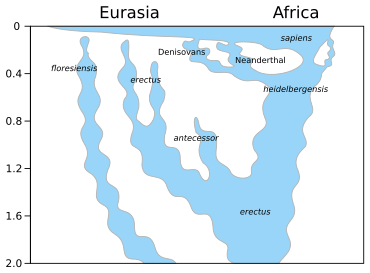 Schematic representation of the emergence of H. sapiens from earlier species of Homo. The horizontal axis shows geographic location; the vertical axis shows time in millions of years ago.
Blue areas show presence at a given time and place.

The recent African origin of modern humans is the mainstream model of the origin and dispersal of anatomically modern humans.

The hypothesis that humans have a single origin was published in Charles Darwin's The Descent of Man (1871). The concept is supported by a study of present-day mitochondrial DNA, and with evidence based on physical anthropology of fossil humans. According to genetic and fossil evidence, older versions of Homo sapiens evolved only in Africa, between 200,000 and 100,000 years ago, with members of one branch leaving Africa by 90,000 years ago and over time replacing earlier human populations such as Neanderthals and Homo erectus.

The recent single origin of modern humans in East Africa is the near-consensus position held within the scientific community.

Scientific study of human evolution is mostly concerned with the development of the genus Homo, but usually involves studying other hominids and hominines as well, such as Australopithecus. "Modern humans" are defined as the Homo sapiens species, of which the only living subspecies is known as Homo sapiens sapiens.

Similarly, the discovered specimens of the Homo rhodesiensis species have been classified by some as a subspecies, but this classification is not widely accepted.

Earliest fossils of the species

Until recently it was thought that anatomically modern humans first appeared in the fossil record in Africa about 195,000 years ago. Studies of molecular biology suggested that the approximate time of divergence from the common ancestor of all modern human populations was 200,000 years ago. The broad study of African genetic diversity found the ǂKhomani San people had the greatest genetic diversity among the 113 distinct populations sampled, making them one of 14 "ancestral population clusters". The research also placed the origin of modern human migration in south-western Africa, near the coastal border of Namibia and Angola.

In the 1960s an archaeological site at Jebel Irhoud in Morocco was dated as about 40,000 years old but it was re-dated in the 2000s. It is now thought to be between 300,000 and 350,000 years old. The skull form is almost identical to modern humans, though the jaw is different.

The forces of natural selection have continued to operate on human populations, with evidence that certain regions of the genome show selection in the past 15,000 years.

All content from Kiddle encyclopedia articles (including the article images and facts) can be freely used under Attribution-ShareAlike license, unless stated otherwise. Cite this article:
Homo sapiens Facts for Kids. Kiddle Encyclopedia.