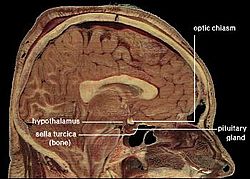 Position of pituitary and hypothalamus

The pituitary gland is an important part of the endocrine system. Attached to the hypothalamus, also a gland, it is located at the base of the brain between the eyes. It controls a whole range of vital functions by secreting hormones.

Here one hormone is produced:

All content from Kiddle encyclopedia articles (including the article images and facts) can be freely used under Attribution-ShareAlike license, unless stated otherwise. Cite this article:
Pituitary gland Facts for Kids. Kiddle Encyclopedia.