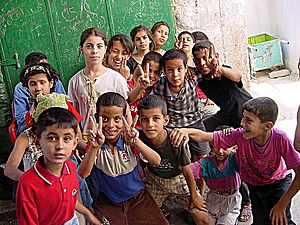 Boys and girls during childhood

Childhood is the period between birth and puberty. Childhood ends when a human being begins puberty. The state or period of being a child is called childhood. In many places, childhood ends at a fixed age of majority. The child becomes an adult, sometimes with a rite of passage. Another word for teenagers and adolescents is "youth".

All content from Kiddle encyclopedia articles (including the article images and facts) can be freely used under Attribution-ShareAlike license, unless stated otherwise. Cite this article:
Childhood Facts for Kids. Kiddle Encyclopedia.