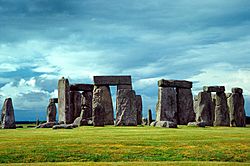 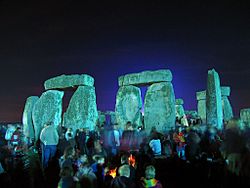 Summer Solstice: visitors are not usually allowed this close! 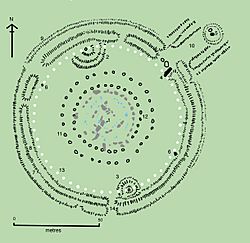 Plan of Stonehenge in 2004. Trilithon lintels omitted for clarity. Holes that no longer, or never, contained stones are shown as open circles. Stones visible today are shown coloured

Stonehenge is a prehistoric World Heritage Site 8 miles (13 kilometres) north of Salisbury in Wiltshire, England. It is made of a henge, with standing stones in circles.

There were three main building phases, each between about 3100 BC and 1950 BC. The first circle, ~3000 BC, was made of timber. The post holes for the timber have been found. Around 2600 BC, the builders gave up timber in favour of stone. Most of the construction took place between 2640 and 2480 BC.

The first stone circle was a set of 'bluestones'. The holes held up to 80 standing stones (shown blue on the plan), only 43 of which can be traced today. The bluestones (made of dolerite, an igneous rock), were thought for much of the 20th century to have been brought from the Preseli Hills, 160 miles (260 kilometres) away in modern-day Pembrokeshire, Wales. Another theory is that they were brought much nearer to the site as glacial erratics by the Irish Sea Glacier.

Later, ~2400 BC, 30 huge grey sarsen stones were brought to the site. They were erected in a circle 33 metres in diameter, with lintels on top of the standing stones. The remaining blue circles were placed as an inner circle. The site was in use until the Bronze Age. The modern Stonehenge consists entirely of original stones, some of which have been replaced in upright position.

There are also several passage tombs and many tumuli nearby.

No one knows who built Stonehenge or why they built it. During the summer solstice, the sunrise lines up with some of the stones in a particular way. This suggests that the arrangement of stones may work as a calendar. In Egypt and South America, similar ancient buildings can be found. They also show the time of the solstice.

The World Heritage Site includes Avebury and Stonhenge together, though they are quite distinct sites. Stonehenge, however, does have a number of satellite structures which are part of the 'ritual landscape':

All content from Kiddle encyclopedia articles (including the article images and facts) can be freely used under Attribution-ShareAlike license, unless stated otherwise. Cite this article:
Stonehenge Facts for Kids. Kiddle Encyclopedia.