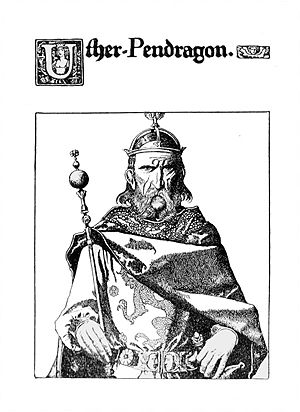 Uther Pendragon is the father of King Arthur in the Arthurian legend. His name, Pendragon, means the "Chief-Dragon", which means he is the "foremost leader" or "chief of warriors". He is mentioned briefly in Old Welsh poems, but his biography was first written down by Geoffrey of Monmouth in his Historia Regum Britanniae (History of the Kings of Britain). Geoffrey's description of him has been used in most later stories.

According to the stories, Arthur is the son of Uther Prendragon and the Lady Igraine.

All content from Kiddle encyclopedia articles (including the article images and facts) can be freely used under Attribution-ShareAlike license, unless stated otherwise. Cite this article:
Uther Pendragon Facts for Kids. Kiddle Encyclopedia.