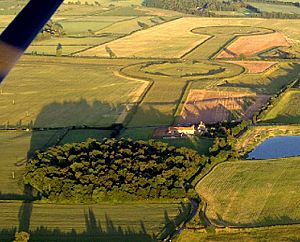 The three aligned henges of the Thornborough Henges complex

A henge is a Neolithic earthwork. Henges are typical of the British Isles (for example Stonehenge), but there are a few similar structures in continental Europe.

Henges have a ring bank and ditch. They are not thought to be primarily defensive, because their ditch is inside the wall or rampart. For defence, it would seem better to have the ditch outside the bank. That way, attackers would need to climb up further. Their function is thought to be mainly ceremonial. This is discussed often in relation to Stonehenge.

Henges are divided into three types:

All content from Kiddle encyclopedia articles (including the article images and facts) can be freely used under Attribution-ShareAlike license, unless stated otherwise. Cite this article:
Henge Facts for Kids. Kiddle Encyclopedia.