Control of fire by early humans facts for kids 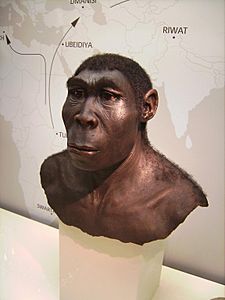 A reconstruction of Homo erectus. Anthropologists believe that H. erectus was the first human species to control fire.

When humans first learned how to control fire, it was an important step in their culture. It allowed humans to cook food and get warmth and protection. Making fire also allowed activity into the dark, and gave some protection from predators and insects.

The cooking of food was probably the most useful effect of fire. There are foods like meat and fruits which do not need cooking, but others, such as root vegetables, mostly need cooking.

We do not know for sure when this step was taken. "Fire was first controlled by humans anywhere from about 230,000 years ago to 1.4 or 1.5 million years ago, depending on which evidence you accept as definitive".

Evidence for the use of fire by Homo erectus beginning some 400,000 years ago has wide scholarly support.

Claims for the earliest definitive evidence of control of fire by a member of Homo range from 0.2 to 1.7 million years ago (mya).

The earliest evidence of humans using fire comes from many archaeological sites in East Africa, like Chesowanja near Lake Baringo, Koobi Fora, and Olorgesailie in Kenya. The evidence at Chesowanja is red clay shards that scientists are 1.42 million years old. Scientists reheated some of the shards at the site, and found that the clay must have been heated to 400 °C to harden.

At Koobi Fora, there are archaeological sites with evidence of control of fire by Homo erectus 1.5 million years ago, with the reddening of sediment that can only come from heating at 200—400 °C. There is a hearth-like depression at a site in Olorgesailie, Kenya. Some very tiny charcoal was found, but it could have come from a natural brush fire.

In Gadeb, Ethiopia, fragments of welded tuff that seemed to have been burned were found in Locality 8E, but re-firing of the rocks may have happened because of volcanoes erupting nearby. These have been found among Acheulean artifacts made by H. erectus.

In the Middle Awash River Valley, cone-shaped depressions of reddish clay were found that could be made by temperatures of 200 °C. These features are thought to be burned tree stumps such that they would have fire away from their habitation site. There are also burnt stones in the "Awash Valley", but volcanic welded tuff is also in the area.

The earliest certain evidence of human control of fire was found at Swartkrans, South Africa. Many burnt bones were found among Acheulean tools, bone tools, and bones with cut marks that were made by hominids. This site also shows some of the earliest evidence of H. erectus eating meat. The Cave of Hearths in South Africa has burned deposits dated from 0.2 to 0.7 mya, as do many other places such as Montagu Cave (0.058 to 0.2 mya and at the Klasies River Mouth (0.12 to 0.13 mya.

The most powerful evidence comes from Kalambo Falls in Zambia where many things related to the use of fire by humans had been found, like charred wood, charcoal, reddened areas, carbonized grass stems and plants, and wooden implements which may have been hardened by fire. The place was dated through radiocarbon dating to be at 61,000 BP and 110,000 BP through amino acid racemization.

Fire was used to heat silcrete stones to increase their works before they were knapped into tools by Stillbay culture. This clue shows this not only with Stillbay sites that date back to 72,000 BP but sites that could be as old as 164,000 BP.

An important change in the behavior of humans happened because of their control of fire and the light that came from the fire. Activity was no longer restricted to the daylight hours. Some mammals and biting insects avoid fire and smoke. Fire also led to better nutrition though cooked proteins.

Richard Wrangham of Harvard University argues that cooking of plant foods may have caused the brain to get bigger, because it made complex carbohydrates in starchy foods easier to digest. This made humans absorb more calories.

Stahl thought that because some parts of plants, like raw cellulose and starch are hard to digest in uncooked form, they would likely not be a part of the hominid diet before fire could be controlled. These parts include stems, mature leaves, enlarged roots, and tubers. Instead, the diet was made up of the parts of the plants that were made of simpler sugars and carbohydrates such as seeds, flowers, and fleshy fruits. Another problem was that some seeds and carbohydrate sources are poisonous. Cyanogenic glycosides, which are in linseed, cassava, and manioc, amongst others, are made non-poisonous through cooking. The teeth of H. erectus and the wear on the teeth reflect the consumption of foods such as tough meats and crisp root vegetables.

The cooking of meat, as can be seen from burned and blackened mammal bones, makes the meats easier to eat. It is also easier to get the nutrition from proteins because the meat itself is easier to digest. The amount of energy needed to digest cooked meat is less than that needed for raw meat, and cooking gelatinizes collagen and other connective tissues as well, it "opens up tightly woven carbohydrate molecules for easier absorption." Cooking also kills parasites and food poisoning bacteria.

All content from Kiddle encyclopedia articles (including the article images and facts) can be freely used under Attribution-ShareAlike license, unless stated otherwise. Cite this article:
Control of fire by early humans Facts for Kids. Kiddle Encyclopedia.