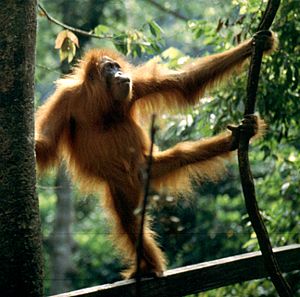 For a full account of the biological family, see Hominidae

A hominid is any member of the biological family Hominidae. These are the "great apes", living and extinct. At present there are humans, chimpanzees, gorillas and orangutans.

The word "hominid" has been used in various ways. The classification of the great apes has been revised several times in the last few decades. These revisions led to different uses of the word "hominid". The original meaning of the taxon Hominidae meant only humans and their closest relatives. Now this group is called the Hominina.

The primatological term hominid is easily confused with a number of very similar words:

The dispute is really about whether humans and Australopithecines are sufficiently different from chimpanzees to rank as a separate family.

In morphology and life style they are, in genetics they are not. A move from rainforest to savannah and woodland led first to bipedalism (walking on two feet). Later, hunting and social needs led to larger brains brains and the making and use of tools. These differences between human beings and the other great apes are certainly important. However, a genetically based taxonomic classification shows the genetic differences are not enough to divide us into separate families. Genetics, rather than morphology, is more widely accepted as the critical standard. Many scientists, including anthropologists, use the term "hominid" to mean humans and their direct and near-direct bipedal ancestors.

All content from Kiddle encyclopedia articles (including the article images and facts) can be freely used under Attribution-ShareAlike license, unless stated otherwise. Cite this article:
Hominid Facts for Kids. Kiddle Encyclopedia.